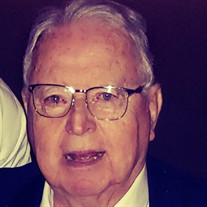 William Maher Langdon was born on September 21st, 1930 and he died on November 30th, 2020, seven months after his wife of over 60 years died. He lived a huge, happy life, filled to the brim with great friends, great times and an extended family that loved him like crazy. My dad was a musician. He graduated from Pitt, where he played clarinet in the Pitt marching band. He served in the military, playing in the Army band during the Korean war. He toured around Europe playing saxophone in the officer’s clubs and he was the first to admit that if you had to go to war, that was the way to do it. He even had his own orchestra at one point. He was a salesman and retired from the same company he started working for after graduating college. He loved to sing and was a member of the church choir as well as performed with Vaud Villities for many years. He was a lifetime member of Tri-Village Sertoma and made the most incredible friends through that club. They volunteered together, vacationed together, and did a lot of partying together. A. Lot. He was an usher at Ohio State football games, a lifelong member of St. Timothy Church, a member of the Catholic Men’s Club, he played in a Bocce league and he was an Eagle Scout. He loved roller coasters, he didn’t eat cheese and he loved boating. Oh my gosh, did he love boating. When his friends made fun of his not-too-impressive 1st boat, he defended it by saying “it’s a nice boat” and that became its name. After that, he had Nice Boat I, Nice Boat II, Very Nice Boat and ultimately, Damn Nice Boat, in which he spent many happy hours cruising around Lake Cumberland. He was the most loving, dedicated, loyal, beautiful man and Me, Billy, Diane, Trey, Anna, Kenzie, Alex, Aaron, Anabel, Journey and all his nieces & nephews will miss him incredibly. Visitation will be held from 10:00-11:00 am on Saturday, December 5, 2020 at Rutherford Funeral Home at Powell, 450 West Olentangy Street, Powell, OH 43065 with Graveside Service and Burial immediately following at Resurrection Cemetery. Please wear a mask in the funeral home and at the cemetery. In lieu of flowers, donations can be made in my parent’s names to Catholic Social Services, which is the agency they adopted Billy & I through.

William Maher Langdon was born on September 21st, 1930 and he died on November 30th, 2020, seven months after his wife of over 60 years died. He lived a huge, happy life, filled to the brim with great friends, great times and an extended family... View Obituary & Service Information

The family of William Maher Langdon created this Life Tributes page to make it easy to share your memories.

Send flowers to the Langdon family.