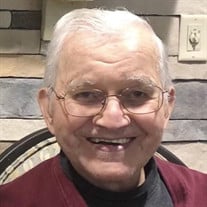 William Peter Kaldis, Professor Emeritus of History at Ohio University, died in Columbus, Ohio on May 26, 2021, at 8:57PM. Bill was born June 15, 1923 in Lowell, Massachusetts, the son of Panagiotis and Panagiota Kaldis. Bill was preceded in death by his wife of 63 years, Cynthia Anne, brothers Peter and Nicholas, and sisters Jenny, Joyce, Alice, and Frieda; a sister, Helen, survives. He leaves behind children Peter (Julie), Nicholas (Shu-Min), and Maria Arend (Todd). He has six adored grandchildren, Nicholas, Kristina (Adam), Alexander, Katherine, Alexandra, and Arden. In 1943, Bill enlisted in the military and served from August, 1943 through January, 1946. He served in the 19th Infantry Regiment (24th Infantry Division) as an Antitank Gun Specialist and completed his service as Technical Sergeant. He saw combat in New Guinea and the Philippines, and was part of the Occupational Forces on Shikoku Island, Japan. He was awarded the Purple Heart, Asiatic Pacific Theater Campaign Ribbon with Bronze Service Arrowhead, and a Philippine Liberation Ribbon with two Bronze Service Stars. After the war, Bill became the first in his family to attend college on the GI Bill. He earned his BA degree from Ohio State and, later, his MA and PhD degrees from the University of Wisconsin. He then began a long career as a history professor, holding positions at the University of Wisconsin, University of Cincinnati, University of Kentucky, and Ohio University, from where he retired, in 1997, after three decades of service. During his three decades at Ohio University, Bill taught courses in Western Civilization, Balkan and Byzantine History, Early Christianity and introduced a course on the Ancient Greek Olympics. He was twice elected University Professor of the year by the student body. For many years, he led a popular study-abroad program to Greece for students and local residents. Bill also served as advisor to the Phi Alpha Theta academic honor society in history and the Barbell Club at Grover Center. He was a member of the American Historical Society and The Modern Greek Studies Association. Bill was awarded the Fulbright Scholarship on three separate occasions. On his final Fullbright, Bill was accompanied by Cynthia and their three young children. The children attended Greek elementary school, where they learned the language and customs. Bill and Cynthia also took the kids to explore many archeological sites. Bill’s Fulbright research led to the publication of his book, John Capodistrias and the Modern Greek State (1963). In his 40s, Bill completed over a dozen marathons, including the Boston Marathon and many Athens (Ohio) Marathons. He was a proud runner and supporter of the Athens Marathon and arranged to have laurel wreaths flown in from Greece to crown the winners. He was a passionate fan of the Red Sox, Celtics, and Patriots, and an ardent OSU Buckeyes fan. Bill was a life-long member of the Greek Orthodox Church; he and Cynthia were also members of the Good Shepherd Episcopal Church in Athens, where Bill served as an usher. For decades, Bill arranged the monthly Greek Orthodox community services held at the Good Shepherd. The family will attend a burial with full military honors at Arlington National Cemetery. “The unexamined life is not worth living” - Socrates

William Peter Kaldis, Professor Emeritus of History at Ohio University, died in Columbus, Ohio on May 26, 2021, at 8:57PM. Bill was born June 15, 1923 in Lowell, Massachusetts, the son of Panagiotis and Panagiota Kaldis. Bill was preceded in... View Obituary & Service Information

The family of William P. Kaldis created this Life Tributes page to make it easy to share your memories.

Send flowers to the Kaldis family.