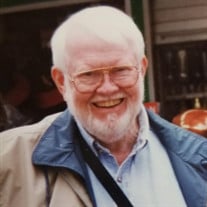 William ‘Bill’ Evans Leffel, age 88 passed away Thursday, October 21, 2021. He was born on May 2, 1933, to Guy and Dee (Evans) Leffel in Springfield, Ohio. Bill graduated from Springfield High School, Wittenburg University, and proudly served his country in the Army during the Korean Conflict. On April 8, 1960, he married Dolores (DeeDee) Justus. They moved to Columbus in 1962 and lived there and in Dublin, until moving to Hilliard in 2016. Bill had a lifelong love for God’s world, an adventurous streak, a creative soul, and a deep love of sports. Bill coached several youth baseball teams and served as the Commissioner of the Prairie Boys Athletic Association on Columbus’ far west side. He loved supporting his grandchildren with their sporting and artistic endeavors. He worked 34 years for Nationwide Insurance, spending most of his time as a Division Manager in the Corporate Investment Accounting department. He was preceded in death by his parents; brother, Jack Leffel; brothers-in-law, George Kopp and Don Dickes; and beloved wife of 61 years, DeeDee, who passed this summer. He is survived by his much-loved family: daughter, Lynne (Craig) Smith; son, Mark (Cathy) Leffel; grandchildren, Jeff (Skylar) Smith, Ryan (Ellie LeBuhn) Leffel, Allie Smith, and Jillian Leffel; great-grandson, Ruger; sister, Kay Kopp and brother Joe (Sue) Leffel; sister-in-law Phyllis Dickes, and sister-in-law and brother-in-law Joyce and Ed Pitt; several nieces, nephews and cousins. The family will receive visitors at 2:00pm on Sunday, November 21, 2021 in the Theater at Stone Oak Retirement Community, 4160 Trueman Blvd., Hilliard, OH, followed by a Memorial Service beginning at 3:00pm. In lieu of flowers donation may be made to: Ohio Health Hospice-Kobacker House, 800 McConnell Drive, Columbus, OH 43214. Condolences may be left at: www.rutherfordfuneralhomes.com.

The family of William E. "Bill" Leffel created this Life Tributes page to make it easy to share your memories.

Send flowers to the Leffel family.