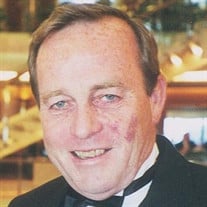 William (Bill) Rooney Keane Jr., 82, of Dublin, OH, died Wednesday, December 23rd, 2020 due to complications from COVID-19 infection. He was the husband of Patricia A. Keane for 52 years, who preceded him in death in 2018. William was born and raised in Harrisburg, PA and was the youngest with four older sisters of William Rooney Keane Sr. and Anna Quinn Keane. He was a member of St. Joan of Arc Church, Powell, OH. Previously, he lived in Harrisburg, PA for many years where he was a member of Holy Name of Jesus Church. William was a 1956 graduate of Harrisburg Catholic High School (subsequently renamed Bishop McDevitt High School), served in the US Army Reserves in the 1960’s, was a 1961 graduate of Grove City College, Grove City, PA and was a 1968 MBA graduate of Temple University Business school, Philadelphia, PA. He worked as an accountant/auditor in New York, New Jersey, and Pennsylvania for multiple private companies and the PA State Government until his retirement in 2003. William was also very active for many decades as a coach and organizer of youth athletic events in the Harrisburg area, a long-time board member of Mountain View Pool, and was a life-long devoted fan of Notre Dame Football. Surviving are daughter Kimberly Keane DeNick MD and her husband Jeff DeNick and grandchildren Jack, Anna, and Samuel of Marlton, NJ; son Kevin Keane and his wife Jennifer Keane and grandchildren Arron and Jesse, of Copenhagen, Denmark; and son Kerry Keane and his wife Stella Keane and grandchildren Matthew, Kerry Jr., Josephine, and Julianna of Powell, OH.; sister Donna Gorman of Richmond, VA, brother/sister-in-law Jim and Joyce Endsley of Harrisburg, PA; sister-in-law, Nancy Herrity of Kill Devil Hill, NC; sister-in-law Patricia Ramer, of Tamaqua, PA, plus dozens and dozens of nieces and nephews and their children from the extended Keane and Ramer families. A public Funeral Mass will be Celebrated and live streamed online on Wednesday, Dec. 30, 2020, 1 PM at St. Joan of Arc Parish website (www.stjoanofarcpowell.org), Facebook (@SJOAPowell) and You Tube (St. Joan of Arc Catholic Church Powell, OH) followed by a private memorial service at 2 PM. Interment with his wife Patricia, will be done at Resurrection Cemetery in West Hanover Township, Harrisburg, PA at a later date. In lieu of flowers, William would want a contribution to Bishop McDevitt High School, www.bishopmcdevitt.org, and click on “Donate Now.”

William (Bill) Rooney Keane Jr., 82, of Dublin, OH, died Wednesday, December 23rd, 2020 due to complications from COVID-19 infection. He was the husband of Patricia A. Keane for 52 years, who preceded him in death in 2018. William was born... View Obituary & Service Information

The family of William (Bill) Rooney Keane, Jr. created this Life Tributes page to make it easy to share your memories.