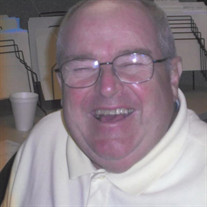 Victor Neal Stentz passed away peacefully at his home on July 1, 2021, succumbing to his 6 year battle against multiple myeloma. He was born in 1942 in Wooster, OH to Adair C. Stentz and Virginia F. Stentz. The family moved to Columbus in the... View Obituary & Service Information

The family of Victor N. Stentz created this Life Tributes page to make it easy to share your memories.

Victor Neal Stentz passed away peacefully at his home on July...

Send flowers to the Stentz family.