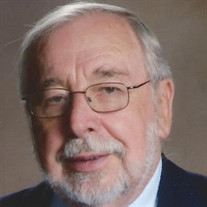 Rentel, Victor Michael 1934-2022 Vic, of Westerville, Ohio, passed away peacefully surrounded by family at The OSU Wexner Medical Center on Thursday, April 14, 2022. Predeceased by his parents, Victor Albert Rentel and Mary Rentel. Survived by wife M. Allene Rentel, daughters Kathryn Rentel, Michele Rentel and son V. William Rentel, grandchildren Kieran Law, Nia Law, Ewan McKay, Summer McKay and Weston Ginther, brothers Llewelyn Rentel and the Very Reverend Father Daniel Rentel, as well as many beloved cousins, nieces, and nephews. Calling hours and memorial service will be held on Friday, April 29, 2022 from 4:00-7:00 pm at the Rutherford-Corbin Funeral Home, 515 High St, Worthington, OH 43085, 614- 885-4006. Funeral services will be held on Saturday, April 30, 2022 at 9:30 am at St. Gregory of Nyssa Orthodox Church, 2219 Summit Street Columbus, OH 43201, 614-261-6006. Interment following at Resurrection Cemetery, 9571 North High Street, Route 23 North, Lewis Center, Delaware County, Ohio, 43035, 614-888-1805. In lieu of flowers, please send donations to The UNICEF USA fund to help the children of Ukraine at https://www.unicefusa.org/ Victor was born in 1934 and grew up in a close family in Altoona, Pennsylvania. He graduated from Altoona High School in 1952 and went on to enlist in the United States Air Force. He served from 1952 to 1956 and was a veteran of the Korean War, honorably discharged. He graduated from Penn State University with a Bachelor of Arts in Secondary Education and English in 1960 and received a Master of Arts in Reading Education Curriculum from the Jersey City State College of New Jersey in 1965. He taught English at Boonton High School in Boonton, New Jersey for a few years. Victor received his doctorate in Education from the College of Education at the University of South Carolina at Columbia in 1969 and started his career as an Assistant Professor in the College of Education at the University of Tennessee at Knoxville. Victor moved to The Ohio State University College of Education in 1970 where he served as a Professor and Associate Dean until his retirement in 2005, after which he served as a consultant to the Board of Regents for the Ohio State Department of Education for a number of years. Victor was a respected researcher in the fields of educational psychology, socio-linguistics, and the development of reading and writing in early childhood. He presented and published his work widely. With colleagues, he did groundbreaking research that underpinned the development of the literacy education portion of the children’s television programs like Sesame Street. Later in his career, he became involved in international education and worked with colleagues in Japan, Russia, and Indonesia among others. He was a tireless advocate for teacher education, a dedicated mentor to his graduate students and a generous and admired colleague. Victor was defined by his love for writing and research, and even in retirement continued to read widely and pursue scholarly work. Victor married Allene in 1963 in Boonton, New Jersey and had three children, Kathryn (1964), Michele and Bill (1975). He adored his grandchildren, Kieran, Nia, Ewan, Summer, and Weston, loved spending time with them and was proud of their achievements. He cared deeply for his mother, Mary, treasured his relationship with brothers Lew and Danny, and savored time spent with his extended family throughout his life—grandparents, aunts, uncles, cousins, nieces and nephews. For the fifty-nine years of their marriage, his loving wife Allene ever remained the Jersey girl who caught his eye. Victor enjoyed fishing of all types, was an avid baseball fan, and a classical music enthusiast. He was an active parishioner at St. Gregory of Nyssa Orthodox Church, and volunteered for the Sierra Club. He was a great story teller and an armchair philosopher, loved humor of all sorts, devoured the news, hated yardwork, and despaired of the lack of good bread and Democrats in Ohio. There was no one quite like him, and his absence will be felt deeply. The family would like to extend their heartfelt gratitude to the medical teams at The OSU Wexner Medical Center for the compassionate care Victor received while in the Surgery Intensive Care Unit.

The family of Victor Michael Rentel created this Life Tributes page to make it easy to share your memories.

Send flowers to the Rentel family.