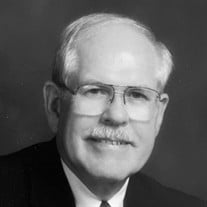 FELDMILLER, Victor A., executive, community volunteer and head of family, passed away Saturday evening, January 29, 2022, at his home in Granville, Ohio surrounded by his loving family. Born on June 21, 1927, in Cochranton, Pa, Vic came into this world on the longest day of the year which might have been an indicator of his long and full life ahead. He earned the deep love and respect of his family and countless friends along the way. Vic was a man of few words but boundless wisdom. His life was built on a natural inclination to work hard, to provide for those he loved, and to do the right thing. Besides gardening, photography, genealogy and his beloved Buckeyes, Vic loved to travel with his family, visiting nearly all of the major national parks together. Vic was born to Opal Wood and Alexander Feldmiller in Cochranton. He grew up on a farm and attended a one room schoolhouse with his brother Ben until they moved to Mount Vernon, Ohio. Vic represented his class at Buckeye Boys State after graduation from Mount Vernon High School, class of ‘45. He attended Denison University where he was a varsity cheerleader and a member of Sigma Alpha Epsilon Fraternity. Vic then earned his masters degree in genetics at The Ohio State University, where he met his wife and mother of his children, Frances Morrison (m. 1952). They made their home in Worthington, Ohio for thirty years. He worked at Battelle Memorial Institute before joining the Ohio Society of Certified Public Accountants where he was Executive Director for 26 years. He became a 32nd Degree Scottish Rite Mason, Valley of Columbus; a member of University Kiwanis Club; Toastmasters International; Marietta College Accounting Advisory Board; Dublin AM Rotary; and Columbus Zoo and Aquarium Docents Association. Vic married his high school friend Marian Benoy in 1984, and their love for each other was obvious to all who knew them. They spent the next 27 years traveling, grandparenting, and giving back to the community. They particularly enjoyed Road Scholar (Elderhostel) programs in the U.S. and abroad, as well as visiting National Parks - anything to get them close to nature. He is preceded in death by Opal and Alexander Feldmiller, Ben Feldmiller, Frances M. Feldmiller, Marian B. Feldmiller and son-in-law, Tom Nikoncyk. He is survived by his daughter, Victoria A. Nikoncyk; son, David S. Feldmiller; step-daughter, Jennifer (Bob) McLaughlin; step-son, John Fryman: grandchildren, Scott, Emily and Gracie Feldmiller, Ryan (Susan) McLaughlin; and his beloved cats, Dodger and Tuki. The family will hold a private interment service at Mound View Cemetery in Mount Vernon. A memorial service will be held Saturday, February 5, 2022, 11:00 a.m. at St. Luke’s Church, 107 East Broadway, Granville Ohio with a gathering of friends and family immediately following. Our family thanks the employees of Otterbein Senior Life Granville (formerly Kendal at Granville) for their loving and excellent care of Vic. Contributions may be made to Columbus Zoo and Aquarium or a charity of your choice. Condolences may be sent to https://www.rutherfordfuneralhomes.com.

FELDMILLER, Victor A., executive, community volunteer and head of family, passed away Saturday evening, January 29, 2022, at his home in Granville, Ohio surrounded by his loving family. Born on June 21, 1927, in Cochranton, Pa, Vic came into... View Obituary & Service Information

The family of Victor A. Feldmiller created this Life Tributes page to make it easy to share your memories.

Send flowers to the Feldmiller family.