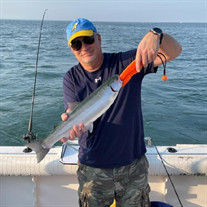 Troy Hershel Taylor, 58, of Powell, Ohio passed away on June 6, 2022, in Dublin, Ohio. He was born on January 3, 1964, to Dale Taylor and Patricia Scott in Columbus, Ohio. He married Dianna Crockett on June 22, 1985, in Columbus, Ohio. He graduated from The Ohio State University in 1995 with an accounting degree. He later attended DeVry University where he received a computer science degree. He was an avid golfer, bowler, and fisherman who enjoyed the outdoors. He spent his whole professional life as a computer programmer in the IT department for Huntington National Bank. He is survived by his wife, Dianna Taylor, daughter Samantha (Brian) Taylor, son Justin Taylor, step-father and mother Bill and Patricia Scott, brothers Tim (Angie) Taylor, Trent (Robyn) Taylor, Ray (Emily) Bice, step-sister Melanie (Scott) Wiser, many nieces and nephews, and his two dogs, Kiley and Carolina. He was preceded in death by grandparents, Troy and Mary Salyers, Jo Ann Taylor, and uncle Russell (Ruth) Salyers. Visitation will be 5-7pm June 14, 2022, with a service immediately following at Rutherford-Corbin Funeral Home, Worthington, Ohio.

The family of Troy Taylor created this Life Tributes page to make it easy to share your memories.

Troy Hershel Taylor, 58, of Powell, Ohio passed away on June...

Send flowers to the Taylor family.