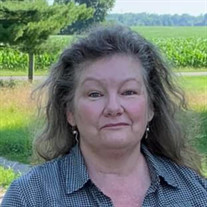 Teressa Kay White, born on the 22nd of July, 1962, passed at the age of 59 due to complications from pneumonia and the corona virus on the 12th of December 2021 at 7pm. Teressa was born to Roy and Judith George as their fourth child. She graduated from Highland High School in 1981, and married her high school love, James White. They were together up to the time of her passing, a total of 42 years. Teressa had one child, Aaron, and would on occasion mention with a glowing smile she would have also liked to have a daughter but never did, save for a young lady named Jackie whom she met at work and formed a close bond with. Enough good things cannot be expressed about Teressa. If she liked you, there’s nothing she wouldn’t do for you. If she thought you needed told about yourself, well she said it to your face with a very straight forward sense of right and wrong. She grew up a little rough, hand-me-downs were common, but it helped forge a heart of gold in her that shined through and touched everything she did. Teressa was always grateful of anything and everything that brought sunshine into her life. Teressa was a wonderful wife to James. She was an exceptional mother to her son, always making sure he was clean and had clothes and never went hungry. Aaron was her pride and joy, often telling him he was her world. With the pride of a true Lady in her lifetime, and a lioness when needs be, she always put family first even at the expense of herself. Teressa enjoyed nature and flowers and most types of animals, especially horses and rabbits. She was an old soul with a one of a kind smile that was a real light in this world. Teressa is survived by James and Aaron, and will eventually be laid to rest on the family property so as to be close to those who love her to no end, as she loved them. A wake is planned for the remembrance of Teressa’s life at Rutherford Funeral Home at Powell, 450 W Olentangy St, Powell, Ohio on December 16th from 6pm to 8pm. The following 17th is her church service, held at St. Joan of Arc, 10700 Liberty Rd S, Powell, Ohio from 10:30am to 11:30am.

Teressa Kay White, born on the 22nd of July, 1962, passed at the age of 59 due to complications from pneumonia and the corona virus on the 12th of December 2021 at 7pm. Teressa was born to Roy and Judith George as their fourth child. She graduated... View Obituary & Service Information

The family of Teressa Kay White created this Life Tributes page to make it easy to share your memories.

Send flowers to the White family.