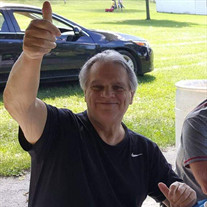 Stanley Wayne DeMarcus, or “Wayne-O” as he was known to most, was born on Oct. 24, 1942. He passed away at the age of 78 on Oct. 29, 2020 in Gahanna, OH at approximately 5:53am. He was born in Cumberland, KY to Ira Lee DeMarcus and Gladys Mae (Woods) DeMarcus. Wayne-O spent most of his childhood and early adult life in Sidney, OH, later he would move to Columbus, OH in pursuit of his musical dreams. He is survived by his two children, Stanley Wayne DeMarcus Jr. “Jay”, 49 and Tiffany Faye DeMarcus, 46 he is also survived by his sisters, Patricia Ann Melvin, Arlene Davis and Linda DeMarcus (Robertson); brother, Danny J. DeMarcus. Wayne-O also leaves behind his eight beloved Grandchildren: Chris and Courtney George, Clayton Daniel Surrell, Lacie Sloan Surrell, Ava Eileen Surrell, Madeline Leigh DeMarcus, Dylan Jay DeMarcus and Kirany Kasia Konkoskia. Wayne-O was loved by many and his extended family reaches far and wide. He affected the lives of everyone around him. His first love was music, and it would be hard to count the lives he touched with his. He loved to golf, go to church and lead singing, loved to hunt, he enjoyed a good football game and great food. Wayne-O was quick witted and could always make people laugh, even on their worst of days. He was preceded in death by his brothers, Tommy, Billy Joe, and Jimmy Lee; and sisters, Betty Jean and Donna Mae. His daughter, Rhonda Lynn George also preceded him in death. Visitation will be held Wednesday Nov. 4th at Rutherford Funeral Home, 515 High St. Worthington, OH 43085 from 4-7pm. In lieu of flowers, the family requests that donations be made to MusiCares in honor of Stanley Wayne DeMarcus. Donations can be made at, grammy.com/musicares/donations.

The family of Stanley Wayne DeMarcus created this Life Tributes page to make it easy to share your memories.

Stanley Wayne DeMarcus, or “Wayne-O” as he was known to most,...

Send flowers to the DeMarcus family.