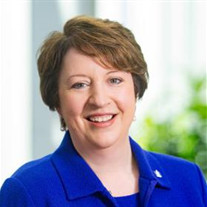 Shelley Brazeau Temple was born February 14, 1970 and returned to her heavenly father on October 28, 2020. Shelley is the twin daughter of Kathleen and Donald Brazeau who have both preceded her in death. She graduated with a bachelor’s degree from Bowling Green State University in 1992. Shelley passed away peacefully with her husband of 21 years and her twin sister by her side. She lived a life of integrity, passion, dedication and kindness. She was dedicated to her profession, but the apple of her eyes, and her greatest joy and pride was her husband and her two children Brendan and Gabby. Shelley was a Nationwide executive, having served for nearly three decades providing outstanding leadership and service to members and leaving a lasting impact. Shelley relished her role as a mentor and earned the respect and adoration of colleagues across the company and throughout her career. She was well known for her commitment to mentoring the current and next generation of leaders. She was affectionally called the incredible SBT, for her commitment, her character and her bravery. Shelley is survived by her beloved family - her husband, Mike, her children, Brendan, and Gabby, her twin sister, Kelley Brazeau, her nephew Aaron Hartley, her mother in law, Patricia Temple, and a host of aunts, uncles, cousins, friends and her Nationwide family. A memorial service will be live-streamed Monday November 2 at 11 am. http://rebrand.ly/shelleytemple We will forever adore and remember our kind, brave, fearless Shelley. We will stand strong knowing you are now watching over us. In lieu of flowers, the family ask that donations be made to the American Cancer Society, or the American Lung Association.

Shelley Brazeau Temple was born February 14, 1970 and returned to her heavenly father on October 28, 2020. Shelley is the twin daughter of Kathleen and Donald Brazeau who have both preceded her in death. She graduated with a bachelor&#8217;s... View Obituary & Service Information

The family of Shelley Brazeau Temple created this Life Tributes page to make it easy to share your memories.

Send flowers to the Temple family.