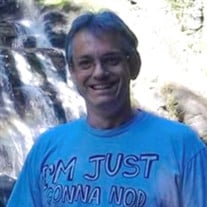 (Thomas) Scott Chalfant 7/18/69 - 3/6/22 Scott was born at George Air Force Base, Victorville California and grew up in Columbus Ohio. He died unexpectedly of a heart attack early Sunday morning. He leaves behind many who loved him and will miss him. No parent expects their child to die before them and Scott's mother and father, Deborah and Tom Chalfant are heartbroken at the sudden loss of their son. Scott also leaves behind his loving partner Tammy Spitler, sister Kaylin Brecht (Nick), niece Grace Brecht, Grandmother Jean Parker, Aunt Karen Parker, Uncles Dave Chalfant and Gary (Kim) Parker, cousins Josh and Cherith Marotti, Cory and Olivia Parker, Tommy (Jeanine), David Chalfant, and Kami (Cliff) Matthews, nephews, Gunner, Charlie, and Dylan Grover. He will also be missed by his second family (who called him Scooter) Amy, Charlie, Jessica, Jacob, Justin (Samantha) and Cora, Domitrovich, and Dallas (Angel), and Theo Spitler, and many friends. Scott loved life, his family and his friends. He had a great sense of humor, wonderful smile, and big heart. He was a man of integrity, loyalty, and always ready to help family and friends. Scott was a hard worker and loved figuring out how to fix or repurpose just about anything. He knew so much about so many things and could explain it to you in detail. Scott worked for over 22 years in property maintenance applying all that knowledge. He also loved working as a stagehand at large concert venues. He loved his music and had quite a large collection of memorabilia from the shows he worked. Scott also loved children and was an important part of Rylan, Dallas, Justin, Jacob and Jessica's life. Scott loved sports and excelled in soccer, baseball, and basketball when he was younger. Just like his grandpa, Bob Parker, Scott ushered for Ohio State Buckeye football games and when he stopped, he watched every game (with running commentary) with his dad. He also ushered for Columbus Crew games. He was an avid Cleveland Browns fan win or lose. As an organ donor to LifeLine, he does leave behind parts of himself that will save lives and will live on in others. Scott may be gone but he will not be forgotten. Instead of flowers please help a friend in Scotts name. Friends may call at the Rutherford-Corbin Funeral Home, 515 High Street, Worthington on Sunday March 13, 2022 from 4:00pm to 6:00pm, where a Memorial Service will be held at 6:00pm.

(Thomas) Scott Chalfant 7/18/69 - 3/6/22 Scott was born at George Air Force Base, Victorville California and grew up in Columbus Ohio. He died unexpectedly of a heart attack early Sunday morning. He leaves behind many who loved him and will... View Obituary & Service Information

The family of Scott Chalfant created this Life Tributes page to make it easy to share your memories.

Send flowers to the Chalfant family.