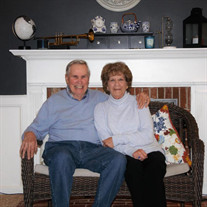 Ronald passed away suddenly on March 17, 2021. He was 89 years old. Ronald Randolph Smith was born on February 26, 1932 to parents Charles and Ruth Smith and he had 2 brothers Stan and Roger. Ron was a lifelong Columbus native, but enjoyed visiting other places and meeting new people. Ronald served in the Navy as part of a fire crew and loved being on the ocean and the time he spent on his ship. While in the Navy, wherever Ron was stationed around the world, he immersed himself into the local culture. Ron formed and maintained friendships with the people he met during his tour of duty. After an honorable discharged from the Navy, Ron returned to Columbus where he met and fell in love with his beautiful future wife Faye and they remained married for 64 years. Ron and Faye started a family. He enjoyed staying in shape and was an avid runner, but he also enjoyed tennis, golf, and a good game of horseshoes. Ron loved spending time at the Battelle Darby Creek Metro Park, where he ran and hiked the trails. He was known by all of the rangers and the wildlife as well. He met a squirrel that he named Pete who greeted him every day. Pete eagerly waited for nuts that Ron kept in his pockets just for him, and Pete would run around his car searching for treats. Ron was an avid bird watcher and spent many hours watching them at the park and on his feeders at home. Ron retired from the International Harvester plant in Springfield, Ohio and was highly respected for his work ethic. Ron had a knack for putting people at ease and made friends everywhere he went. He was on a first name basis with the people that worked at the establishments he frequented. Ron had a saying; Actions speak louder than words. It was something he lived by. He never missed an opportunity to help someone in need. Many times he put his own needs last in order to help someone who needed a helping hand or just an encouraging word. He was a man of character and lived his life with the highest level of ethics, morals, and respect for others. After retirement, Ron spent more time at the park and was involved with his now growing family of grandchildren and eventually great grandchildren. He deeply loved his wife and family and was a role model to all that knew him. He was a great man and will be truly missed by those of us that knew and loved him. Ronald is survived by his loving wife of 64 years Glenna Faye Smith, his sister in-law Ruth Roark, many nieces and nephews. He is also survived by his four children and their spouses, Kim Grim (Art Chan), Rhonda Dill, Kathy Condon (Jay), Mark Smith (Debra Dencer). He is also survived by his grandchildren Rian Grim (Rachael), Aaron Grim, Chelsea Grim (Adam Green), Chloe Chan, Jeremy Dill, Joshua Dill, Nicholas Condon, and great grand-children Silas & Ezra Grim. Ron was proceeded in death by his parents Charles & Ruth Smith, brothers Stanly & Roger Smith. A celebration of Ron’s wonderful life will be held at Battelle Darby Creek Park 1775 Darby Creek Drive, Galloway, Ohio 43119. It will be held in the Locust Shelter House at 3:00 pm on Saturday, April 3, 2021. Light refreshments will be served and remember to follow Covid protocols. Come and celebrate this wonderful life with his family and friends. In lieu of flowers, please make donations to: The National Audubon Society or the Metro Parks of Ohio

Ronald passed away suddenly on March 17, 2021. He was 89 years old. Ronald Randolph Smith was born on February 26, 1932 to parents Charles and Ruth Smith and he had 2 brothers Stan and Roger. Ron was a lifelong Columbus native, but enjoyed... View Obituary & Service Information

The family of Ronald R. Smith created this Life Tributes page to make it easy to share your memories.

Send flowers to the Smith family.