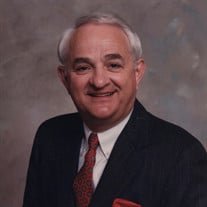 His pilgrimage on earth complete, Ronald Joseph Cory entered eternal life peacefully on April 20, 2022. Ron was born on June 11, 1932 in Cleveland Ohio. He was educated at Our Lady of Peace School, where he met the love of his life, Loretta. He went on to attend Cathedral Latin School and earned a bachelor’s degree from John Carroll University. Ron and Loretta were married in August, 1954. He was commissioned a Second Lieutenant in the US Army in 1955 and upon completion of active duty served in the Army Reserves for several years where he earned the rank of Captain. Ron had a distinguished career in industrial management and industrial distribution. Ron joined the Patterson-Leitch company in 1957 and was eventually assigned as District Sales Director in Central Ohio. Ten years later, he joined Borger Brothers, a heavy steel plate fabricator as Vice President, Operations. He saw the company through a number of challenging situations including the engineering and fabrication of complex radioactive shipping containers for the US Navy and the Atomic Energy Commission. When completed, Ron accepted an offer to join the Ben-Tom companies as VicePresident, Manufacturing, responsible for the operations of its metal fabrication division as well as other manufacturing divisions. In 1978 Ron was appointed President of the Ross Willoughby Company, an Edwards Company. Under his management the company became a recognized leader in the Industrial Distribution field and received numerous awards from both vendors and customers. An integral part of the Ross-Willoughby Company’s success was its affiliation with ID.One, an international buying group of which Ron also served as President. Under his direction they eventually merged with the Affiliated Distribution Group to form the largest industrial buying group of its kind in the world. During the late 1990’s, Ross-Willoughby was acquired by Windpoint Partners to become the flagship company of the new enterprise. As a part of the acquisition, Ron joined the new company as Vice President primarily responsible for mergers and acquisitions and other traditional matters. Retiring in 2001, Ron rejoined the Edward’s organization in the commercial real estate area. Ron served on numerous business and civic boards and organizations including the Riverside Methodist Hospital Foundation Board, Children’s Hospital Foundation board, Crittenton Family Services, the Distributor Advisory Board of the Precision Twist Drill Co., Loctite Corporation, Cooper Tools, Sandvik Coromant Corporation, Stanley Proto Industrial Tools, Bay State Abrasives and the 3M company. He also served on the board of the American Welding Society. Ron was a long-time member of the Athletic Club of Columbus and the Brookside Golf and Country Club. He was also a past president of the Touchdown Club of Columbus. Ron was a devoted and loving father who enjoyed many precious moments with his wife, children and grandchildren and a devout Catholic. Preceded in death by his parents Carmen and Helen and brother Gerald. He is survived by his loving and devoted wife Loretta. Loving father of Daniel (Jeanne) Cory of Denver, CO, Paul (Kelli) Cory of Powell, OH, Jack of Columbus, OH and Joan (Jeremy) Barnes of Loveland, OH and brother David (Dottie) of North Royalton, OH and grandfather of Robert and Anthony, Emily Frost, MacKenzie and Nicholas, Julia and Katherine Barnes, nieces and nephews, Brian (Cheri) Cory, Melissa (Greg) Zito, Michael (Mary) Cory, Louise and Laura Cortland, Mark Leonetti and lifelong friend Richard (Rosemarie) Dow Middleburg Heights, OH. Friends and family will be received Thursday, April 28, 2022 from 5:00pm to 7:00pm at RUTHERFORD-CORBIN FUNERAL HOME, 515 High St., Worthington OH. Visitation at 10:00am prior to funeral Mass at 11:00am on Friday April 29, 2022 at St. Peter’s Catholic church, Columbus. Reception following. Contributions in Ron’s memory may be made to the American Heart association or consider donating a pint of blood. Condolences can be made to the family at www.rutherfordfuneralhome.com

His pilgrimage on earth complete, Ronald Joseph Cory entered eternal life peacefully on April 20, 2022. Ron was born on June 11, 1932 in Cleveland Ohio. He was educated at Our Lady of Peace School, where he met the love of his life, Loretta.... View Obituary & Service Information

The family of Ronald Joseph Cory created this Life Tributes page to make it easy to share your memories.

Send flowers to the Cory family.