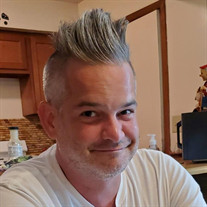 Rodney L. “Rod” Kincaid Jr. age 42, passed away unexpectedly, on May 3rd 2022 at Riverside Hospital. A loving husband, stepfather, step-grandfather, son, brother, and dear friend. He was born in Kansas City, Kansas on February 1st 1980. He is preceded in death by his grandmother, Barbara Hannah; grandmother, Evelyn Kincaid; grandfather, Bill Kincaid and father-in-law, Roger Marable. He is survived by his loving and dedicated wife, Amy Kincaid; step daughter, Kelsey Sullivan; step son, Maxwell Cottage; step grandson, Zaelyn Fuller; his mother, Tess Kincaid; father, Rodney Kincaid Sr.; sister, Elizabeth Kincaid Shepard; brother, Samuel Kincaid; grandfather, Donald Hannah, several aunts, uncles, over a dozen cousins; as well as his wife’s family, Sara Marable, Ron and Natalie Sekinger, Sam, Nicholas, and Brittany Davis (Fiona Casparro). Rod worked at FedEx Ground. Prior to that, like his wife, Amy, he got “bit by the food bug”. He spent over 20 years in the retail and restaurant business. He worked at The Hills Market for over a decade. He made a huge impact on customers with his creative sandwiches. He was quite the sandwich artist. His most popular sandwiches were “The Duke” (after John Wayne) and the Robert Paulsen (after a character in Fight Club) Not to mention so many more. His wife Amy still has his “holy grail of sandwiches” recipe book. He then continued his passion for food by working at The Anderson’s, Weiland’s Market, La Chatelaine French Bistro, and Wedgewood Country Club. Rod’s personality, laugh, and smile were larger than life. Rod was a talented artist, photographer, ceramist, and had a green thumb for growing the most beautiful cactus plants. He loved spending his time with his wife, Amy. Cooking, listening to music, playing board games, gardening, hiking, glamping :), going to the beach, riding bicycles in Clearwater Beach, and his favorite was watching their “shows” together and holding her hand. Rod was a BIG fan of Phish and went to 10 concerts! His step daughter, Kelsey has a friend who is going to a show in June 2022. And to honor his love for the band, she is going to write his name on a volleyball he will throw into the crowd and have him release a balloon to honor his memory. He was such a HUGE fan of the Star Wars franchise that he and Amy made it a tradition to spend every Christmas, just the two of them, going to the theater or watching one of the many movies or tv series while eating dinner in bed. He was a Chicago Bears Fan and loved playing fantasy football. Rod was a kind and honest man with a “soft underbelly” (His Mother's quote). He will forever be in our hearts. To know Rod was to love him. In lieu of flowers, memorial contributions may be made to the Youth Advocacy Fund SBACT. https://sbact.org/yaf. To help children and teenagers in need of art supplies and funding for education in the field of Art. His wife, Amy is also donating his pottery wheel, clay, and other art supplies to the Graham School art program in Clintonville Ohio. A celebration of Rod’s life will be held Tuesday June 21st; Amy and her loved ones will be receiving friends from 12pm to 3pm at Whetstone Park of Roses, Shelter House, 3901 N. High Street, Columbus, Ohio 43214. If you are unable to attend, please pay your respects by visiting the Organ Donor Memorial Wall at 770 Kinnear Road Columbus, OH 43212. Also, those who would like to make a toast to Rod’s life please stop by his favorite pizza place, JT’s Pizza in Linworth for an amazing pie! Just no veggies. Rod hated them! Take it home and eat it with your favorite loved one, in bed, while watching anything from Dick Wolf!

The family of Rodney L. "Rod" Kincaid, Jr created this Life Tributes page to make it easy to share your memories.