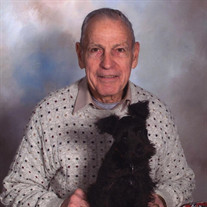 Tustin, Robert Lewis aged 94 years 5 months died on November 11, 2021 at Kobacker House where he was admitted on November 9. It is coincidental that he passed on his mother’s birthday and Veterans Day. He was preceded in death by his wife of 54 years Jo Ann Elaine (Shockley) Tustin (2009), parents Ira C. Tustin, Daisy Ruth (Gloyd) Tustin, sister Ruth Eleanor Kennedy, sister Dolores Ann Fisher, brother-in-law and friend James R. Fisher, nephew Richard K. Kennedy, niece Nancy Sue Rusty (Kennedy) Morris. He is survived by niece Susan Lee Fisher of Canal Winchester and nephew Ronald E. Kennedy (Elaine) of Chillicothe, special cousin Shirley (Tustin) Hoffman, along with many cousins and extended family along with his beloved miniature schnauzer Smokey. He was a 60-year member of the University Lodge #631, AASR, Aladdin Shrine, Past President of Worthington Shrine, Reception, Kentucky Colonel, Royal Order of Jesters and Honorary Member of the Lithopolis Lodge. He worked as a welder at the American Blower Corp of Columbus until he was drafted. As an 18-year-old he served in World War 2 in the Army in Company A 232nd Infantry Regiment on the European front. He was stationed in France, Germany, and Austria. He was at the Eagle’s nest at the end of the war. He worked as a Master Electrician at the former Armstrong Furnace for 38.5 years. He met and married the love of his life in 1955 and they enjoyed extensive travel. They visited all 50 states as well as Canada, Mexico Europe, and South America. He was a member of the North Baptist Church where he was welcomed after the passing of his wife. He enjoyed the day trips offered by the Worthington Community Center and Griswold Senior Center. He will be remembered for his great sense of humor and devotion to others. Special thanks to the team members from Central Ohio Primary Care, Ohio Health and especially the Kobacker house for their loving care. Friends and family may call at Rutherford-Corbin Funeral Home at 515 High Street, Worthington, Ohio. Visitation will be on Wednesday November 17 2021 from 1:00pm to 3:00pM. a Funeral Service with Masonic and Military honors will be held at 3:00pm. Private interment will be held at later date at Harrison Township Cemetery. In lieu of flowers, contributions may be made to either University Lodge #631 (2436 W. Dublin-Granville Road, Columbus, Ohio 43235-2709) or Aladdin Shrine Hospital for Children.

Tustin, Robert Lewis aged 94 years 5 months died on November 11, 2021 at Kobacker House where he was admitted on November 9. It is coincidental that he passed on his mother&#8217;s birthday and Veterans Day. He was preceded in death by his wife... View Obituary & Service Information

The family of Robert Lewis Tustin created this Life Tributes page to make it easy to share your memories.

Send flowers to the Tustin family.