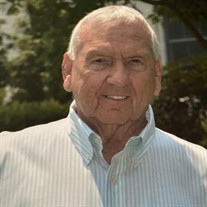 Robert R. Teach, age 92 of Canal Winchester, died Tuesday Dec. 28, 2021 at his home. He was born in Columbus on June 2, 1929 to the late Frank and Thelma (Legg) Teach. Robert was a member of the North High School Class of ’47 and served his country during the Korean Conflict from 1950-1952 in the US Army and was the owner of Legg and Davis Construction. He is preceded in death by his wife Ritchie B. Teach, a son Terry Teach, brother Frank Teach, sister Shirley Johnson, and sister-in-law Ann Teach. Robert is survived by his children Jeff (Linda) Teach, Todd (Donna) Teach, Tim (Linda) Teach, and Amy Teach-Reininger. Grandchildren Emily (Chris) Yunker,, Rebecca Teach, Adam (Hannah) Teach, Clayton (Meghan) Teach; great-grandchildren Addison and Kayden Teach, Peyton Yunker, and Cameron Teach, sister Sally Erikson and his loyal secretary Anna Parisey. There are no services scheduled. In lieu of flowers, donations may be made to Worthington VFW Post #2398, PO Box 243, Worthington, OH 43085 in his memory. RUTHERFORD-CORBIN FUNERAL HOME in charge of arrangements. Condolences to www.rutherfordfuneralhome.com.

The family of Robert Teach created this Life Tributes page to make it easy to share your memories.

Send flowers to the Teach family.