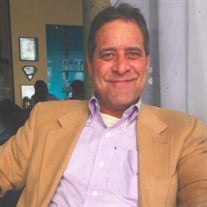 Robert William Powell, Jr. was born on April 1, 1958 in Shaker Heights, Ohio. He was preceded in death by his loving parents Robert W. and Mary Carolyn Powell and infant sister, Mary Carolyn. He is survived by his loving and devoted wife Marcia, whom he cherished. Boog was blessed with two wonderful children, daughter Madeleine Tatarzyn (Jeremy), and son Robert W., III (fiancée Rachel) of whom he was very proud. He was grateful to be part of such a wonderful family and leaves to cherish his memory seven siblings: Mary Ann (Mitch), Margaret L., Nancy E. (Renata), John G., Thomas J., James C. (Eric), and Richard S. (Laura). He was embraced by and welcomed into Marcia’s large Tortora family and will be sadly missed by his sisters- and brothers-in-law, as well as several nieces, nephews and their children. Robert graduated from Ohio University, where he acquired his nickname, “Boog” as a Sigma Chi fraternity brother and president of the chapter. He was a well-known and respected employee of State Auto Insurance for 30 years. He was a lover of all music by Santana and enjoyed the attention created by his Jerry Garcia tie collection. An avid reader he devoured the newspaper each day, watched Jeopardy nightly, embraced traveling and was a true history buff. Bob and Marcia enjoyed “thrifting” and he was a true aficionado of the best stores in town; a stylish dresser. The University of Notre Dame and the Fighting Irish continued to be a part of his life, following a proud tradition in the family that has continued for over a century with four generations, most recently with his daughter Madeleine. He followed the Cleveland Indians and the Columbus Clippers in baseball and remained a loyal fan of the Cleveland Browns. He lived his life dedicated to serving others: a kind, loyal and generous man. Marcia and Bob were married on July 20, 2019, after being together for eight years. Although time was not in their favor, they were grateful to have found in each other a loving spouse, a true friend and an enduring love, that will never be diminished by his untimely death. A private memorial service will be held for the family. Friends who wish to view the memorial service may do so as streaming will begin at 7:00PM Sunday December 13,2020. Click on the link below. https://us05web.zoom.us/j/86943410341? pwd=SC9pK3FwOCtxdW5DQ1VkWTVvZDdBQT09 Password: Remember In lieu of flowers, friends may donate to Toys for Tots (click on link below) or to your favorite charity in Robert’s memory. https://marinetoysfortots.salsalabs.org/localdonationform/index.html? fun_local_campaign_designation=OH-Columbus&scf_unit_code_supporter=OHColumbus

Robert William Powell, Jr. was born on April 1, 1958 in Shaker Heights, Ohio. He was preceded in death by his loving parents Robert W. and Mary Carolyn Powell and infant sister, Mary Carolyn. He is survived by his loving and devoted wife Marcia,... View Obituary & Service Information

The family of Robert Powell created this Life Tributes page to make it easy to share your memories.

Send flowers to the Powell family.