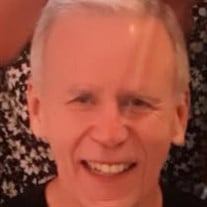 Robert Hugh Johnston passed on Friday, October 30, 2020 at Dublin Methodist Hospital in Dublin, Ohio at 71 years of age after a long-term illness. Bob was born on June 28, 1949 in Akron, Ohio. He was preceded in death by his parents, Russell and Mary Johnston, brother Kenneth, and beloved son, Erin. He is survived by his loving wife, Diane (Gray) Johnston. Bob met Diane at Springfield High School. The two were married on September 17, 1968 and recently celebrated their 52nd anniversary. Bob is also survived by his caring daughter Julie, sister Debra, and grandchildren Brooke, Alaine, and Camryn. Bob attended the University of Akron in Akron, Ohio. Throughout Bob’s career, he owned multiple businesses, including: Lawn Medic, Lawn Arrangers, and Livingston Seed. Bob worked alongside of his son Erin, his nephew Drew, and lifelong friends Kathy (Frederick) Chesser, Les Simpson, and Kenny Gunn. Among his professional accomplishments included several patents related to his seed business. Bob was a loyal friend to many, who appreciated his sense of humor and respected his integrity. Several notable friendships over the years included Barry & Lynda Livingston, Jim & Nancy Cannon, Ken & Karen Helmlinger, Chris & John Scott, and Dana Schmidt. Bob was involved for a number of years in a ministry for young men at the State of Ohio Juvenile Facility in Circleville, Ohio. He attended Vineyard Church in Westerville, Ohio. Bob’s favorite scripture: Ephesians 2:8-10 8 For it is by grace you have been saved, through faith—and this is not from yourselves, it is the gift of God— 9 not by works, so that no one can boast. 10 For we are God’s handiwork, created in Christ Jesus to do good works, which God prepared in advance for us to do. A private memorial service for Bob will be held. In Bob’s memory, should you like to make a memorial donation, please consider The Choroideremia Research Foundation and The Alzheimer’s Association. The Choroideremia Research Foundation www.curechm.org The Alzheimer’s Association www.act.alz.org

Robert Hugh Johnston passed on Friday, October 30, 2020 at Dublin Methodist Hospital in Dublin, Ohio at 71 years of age after a long-term illness. Bob was born on June 28, 1949 in Akron, Ohio. He was preceded in death by his parents, Russell... View Obituary & Service Information

The family of Robert Johnston created this Life Tributes page to make it easy to share your memories.

Send flowers to the Johnston family.