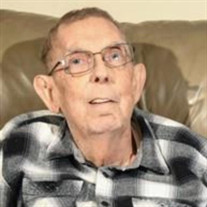 On Sunday, December 13, 2020, Robert Messerly, loving husband and father of two children and 4 grandchildren, passed away at the age of 80. Robert was born on July 10,, 1940 in Warren, OH to Edward and Marguerite (Shaffer) Messerly. He resided in Lewis Center, but was a former resident of both Newton Falls, OH and Howland, OH. He received his degree in mechanical engineering from the University of Cincinnati in 1963. He worked for Wean United which became Danieli Wean. He started a division for Mechanical Engineering for Crowne USA. He held patents for many machines he invented to process steel. On August 13, 1968, he married Lisbeth Hildack. They raised two children, David and Patricia. Robert loved to spend time with his family doing a variety of activities. He and his wife loved to travel all over the world. He also enjoyed golfing for many years. His biggest passion in life was for his family, especially his grandsons. He was known for his quick wit, his infectious smile, and his kind and compassionate spirit. Robert was preceded in death by his mother, Marguerite and his father, Edward. He is survived by his wife, Lisbeth, his son David Messerly (Stacy) and his daughter Patricia Gregory (James), his four grandsons, Grant and Jack Messerly and Aidan and Cameron Gregory as well as his sister Marilyn Sabatino (Paul), niece Carmen Macko (Tom) and nephew, Paul Sabatino Jr. The family will be holding a private service for family and close friends on Saturday, December 19 at 10:00 am at Rutherford Funeral Homes & Crematories in Powell. Graveside service to follow at 11:00 am at Kingwood Memorial Park.

On Sunday, December 13, 2020, Robert Messerly, loving husband and father of two children and 4 grandchildren, passed away at the age of 80. Robert was born on July 10,, 1940 in Warren, OH to Edward and Marguerite (Shaffer) Messerly. He resided... View Obituary & Service Information

The family of Robert H. Messerly created this Life Tributes page to make it easy to share your memories.

Send flowers to the Messerly family.