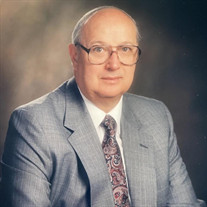 Robert (Bob) Jules DuPont, Sr., age 87, of Columbus, passed away after a full and loving life. Robert was born in September of 1934. After growing up in Pennsylvania and West Virginia, he married his loving wife Bonnie and enjoyed 67 wonderful years together. Robert is preceded in death by his wife Bonnie, his parents, August and Helen DuPont, his brothers Donald, Kenneth, and William DuPont. Robert is survived by his seven children: Denise (William) Kramer, Lisa (Denny) Fike, Robert Jr. (Susan) DuPont, Beth (Flip) Phillips, Gregory (Julia) DuPont, Jill (Christopher) Grimm, and Brian (Kelle) DuPont. Bob was a very proud grandpa to 17 grandchildren: Alexandria (Matt) Foss, Melissa (Corey) Spilman, Eric, Thomas, and Jennifer Fike, Derek (Tessa) DuPont, Brock (Becca)DuPont, Violet Phillips, Sophie DuPont, Grayson, and Sullivan Grimm, Holly, Shaun, Emily, Jacob, Riley, and Joshua DuPont. Bob was also blessed with three great-grandchildren: Finn Kramer, Ruxton, and Remy DuPont. Robert worked hard from a very young age, having lost his father when he was only 16 years old. He graduated high school and followed in the family trade of glass cutting. As a result of the travel involved with that job, he met Bonnie in Mount Vernon, Ohio. They married and began their lifetime adventure together by living in Italy while Robert served in the Army with the US Signal Corp. During their year together in Europe, they solidified their mutual love of travel by visiting different amazing places every chance they got. Upon return to the U.S., they settled in Columbus so Bob could attend The Ohio State University as a pharmacy student. This established the family legacy of OSU graduates now totaling 17 degrees in the family. Bob and Bonnie quickly started a family together and Bob soon became a local pharmacist owning his own stores. For many years he owned Scarlett & Gray pharmacy at the corner of Lane and High Street as well as Family Pharmacy right up the street. These truly were family pharmacies because many of his children and friends worked there. He and Bonnie regularly hosted renowned holiday parties for the staff in the family home. He was loved and respected by so many employees. Robert’s career grew into areas of leadership and mentorship of others all while remaining a family man, coaching little league soccer, softball, and baseball teams, and making time to enjoy travel with Bonnie and the kids. So many great family memories were created while traveling all over the country in the family wagon including regular Minnesota lake trips, east coast beach houses, and grand road trips down south and out west. Professionally, Robert enjoyed great success through his dedication to his mutual loves of pharmacy and relationships with people. He was respected as a natural leader with a strong sense of sportsmanship that carried over from the sports fields to boardrooms. His vast resume included development of the pharmacy services onsite at Harding Hospital, Vice President of the Student Section of the American Pharmacy Association, Executive Secretary and President of the local association (APCO), President of the Ohio Pharmacists Association from 1989-91 and served on its Board of Trustees in following years. Robert also served on the Board of Trustees of the Mental Health Advocates of Franklin County and as its president from 1986-89. He was a technical advisor on Welfare fraud for the Ohio Department of Medicaid Services and then for the Attorney General’s Welfare Fraud Unit. His many accolades include Retail Pharmacist of the Year and the Keys Award in 2004 for outstanding progress of the Ohio Pharmacists Association. Robert will be remembered always as a great dad, ambitious career professional, and a supportive, loving husband. Many will also remember him as a great friend, role model, and mentor. Visiting hours will be held from 2-4pm on Sunday June 5 at Rutherford-Corbin Funeral Home 515 High Street, Worthington, OH 43085. A service will be held on Monday, June 6, 2022, at 10am in the cemetery chapel at Resurrection Catholic Cemetery 9571 High Street, Route 23 North Lewis Center, Ohio 43035.

Robert (Bob) Jules DuPont, Sr., age 87, of Columbus, passed away after a full and loving life. Robert was born in September of 1934. After growing up in Pennsylvania and West Virginia, he married his loving wife Bonnie and enjoyed 67 wonderful... View Obituary & Service Information

The family of Robert DuPont created this Life Tributes page to make it easy to share your memories.

Send flowers to the DuPont family.