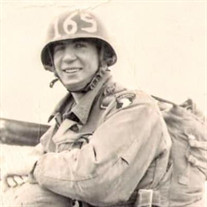 Robert Dellovade (Bullet Bob), 85, of Steubenville, OH, formerly of Follansbee, WV and Avella, PA, passed away on, January 28, 2022 in Columbus, Ohio at Riverside Hospital. He was born on October 24, 1936 in Avella, PA, son of the late Armand Dellovade Sr. and Anna Flori Dellovade. Bob was a 1954 graduate of Avella High School and received his Bachelors degree from West Liberty University. He was a veteran of the 101st Airborne 502nd ABG with the United States Army. One of his greatest accomplishments of his life. Bob was a pitcher for the St. Louis Cardinals Farm League for two years before an injury took him out of the game. He also was a Pitcher for the United States Army. He moved back to the area and was a General Superintendent for Wheeling Pittsburgh Steel for over 30 years, retiring in 1996. He was a true legend at Wheeling Pittsburgh Steel. On July 28,1962 at St. Michaels’s Church in Avella, Pa he married Mary Eleanor Lazzaro, who survives. Surviving in addition to his wife of years are his two daughters, Amy Dellovade Bean of Powell, OH and Leslie Dellovade of Hilliard, OH; three grandchildren, Robert & Anna Bean and Jack Condit; four brothers, Fred (Barbara) Dellovade of Acton, MA, Dennis ( Jan ) Dellovade of Canonsburg, Pa, Pete (Patti) Dellovade of Canonsburg, Ken (Joyce) Dellovade of Moon Township ; Benjamin Condit of Westerville, Oh. And a special family friend, Jim Benedetto of Burgestown, Pa. Deceased in addition to his parents are, son-in-law, Todd Bean; and a brother, Armand Dellovade Jr. At the request of the deceased, there will be no visitations or funeral services. A Celebration of life will be planned at a later date. Memorial contributions can be made to: Honor Flight of Columbus or The Wounded Warrior Project. Honor FIight of Columbus P.O. Box 12036 Columbus, Ohio 43021-0036 614-284-4987 Wounded Warrior: 855-448-3997

Robert Dellovade (Bullet Bob), 85, of Steubenville, OH, formerly of Follansbee, WV and Avella, PA, passed away on, January 28, 2022 in Columbus, Ohio at Riverside Hospital. He was born on October 24, 1936 in Avella, PA, son of the late Armand... View Obituary & Service Information

The family of Robert Dellovade created this Life Tributes page to make it easy to share your memories.

Send flowers to the Dellovade family.