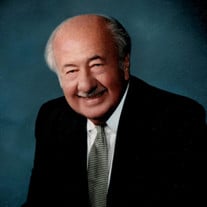 Robert Lynn Caldwell, AIA of Worthington, Ohio passed away peacefully of natural causes on February 8, 2021. Robert was born on December 23, 1936 in Danville, Illinois to Robert and Inez Caldwell. He grew up in Bucyrus, Ohio, married his wife, Jane, on July 11, 1959 and earned his Bachelor of Architecture degree from The Ohio State University in 1960 where he was a member of the Sigma Pi fraternity. Robert joined Schooley Cornelius in 1962 starting a 37-year career. He was offered an ownership share in 1980 and the company was renamed Schooley Caldwell Associates at that time. Some of their most notable projects were the OSU Lincoln and Morrill Towers, the Ohio Statehouse Restoration and new Capital Atrium and The Son of Heaven: Imperial Arts of China exhibit which was installed in what once was the former Central High School building. After retirement, Robert served on the board for 15 years so as to remain connected to the firm he helped to build. Bob was an architect, a husband, a father, a [great]grandfather and a dedicated friend and confidant to all who were lucky enough to know him. He loved cinema, travel, theater, gourmet cuisine and contemporary design. With his dry wit, a scotch in hand and affectionate twinkle, he was a delight at any event. He could sing in a quartet, "help" his sons carve award-winning pinewood derby cars, create a puppet stage to host countless productions, throw his daughter a beautiful wedding in a sanctuary that he designed, grill a tremendous beef tenderloin and design a house that became his home for over 40 years. Robert is preceded in death by his beloved wife of over 50 years Jane Eleanor (Peugh) Caldwell and his parents. He is survived by his sister, Sandy Miller, his children Jeff (Dawn) Caldwell, David Caldwell, Kevin Caldwell and Lisa (Dominic) Maxwell; grandchildren Aaron (Beth), Alex, Lauren, Matthew, Megan, Marissa and Dominic II; and great grandchildren Zac and Ellie. Our love goes out to Sandy Pfeifer who has been a dear, loving companion to Bob and has brought him joy in his final years. We are grateful to Amanda for her kindness and for all the friends, family and caregivers who helped Bob on his final journey. In lieu of flowers, we ask you to contribute to your favorite fine arts organization to keep the arts alive during the pandemic. There will be a celebration of life later this year when we can safely raise a glass to Bob the way he would want us to. We will miss you Bobby

Robert Lynn Caldwell, AIA of Worthington, Ohio passed away peacefully of natural causes on February 8, 2021. Robert was born on December 23, 1936 in Danville, Illinois to Robert and Inez Caldwell. He grew up in Bucyrus, Ohio, married his wife,... View Obituary & Service Information

The family of Robert Caldwell created this Life Tributes page to make it easy to share your memories.

Send flowers to the Caldwell family.