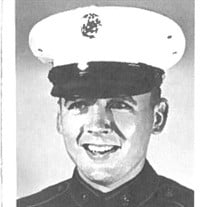 Richard L. Graf (1934 – 2020) Richard L. “Dick” Graf, 86 of Columbus, Ohio died on August 28, 2020. He was born in Lancaster, Ohio on June 26, 1934 to Mary (Hoffer) and Leo Graf. He attended St. Charles, Aguinas, North High School and graduated from Central Evening School in 1953. He played freshman football at Ohio University in 1953 and enlisted in the Marine Corp in 1956. He played baseball in Japan and football in Okinawa for the Sukiran Streaks, 3rd Marine Regiment and was discharged in 1958. He then married his high school sweetheart, Nancy Ries. In 1962 he graduated from Otterbein College and he received a Masters Degree in 1965 from Wittenberg University. He taught at East High School for 2 years, was a guidance counselor at Everett Middle School for 5 years and then found his passion as a truant officer at West High School, where he was for 25 years until he retired from Columbus City Schools. He enjoyed many years of playing handball at the YMCA, socializing at McConnell’s Heart Health Center and coffee time at Wendy’s with friends. He also looked forward to spending time with his family in Hilton Head Island and watching his grandchildren play sports. He was known as the “CANDY MAN”, always carrying snack pack peanut M&M’s and giving them out to restaurant servers and others he met. Dick is survived by his loving wife, Nancy Ries Graf of 61 years, daughter Karen (Dan) Hamilton, grandsons Jacob Richard, Matt (Mary), Ross (fiancée Sally), and granddaughter Katie, a niece and nephews and many friends from McConnell’s and Columbus Schools. He was preceded in death by his parents, sisters Carole (Tom) Sullivan, Marilee (Gene) Moriarty, and sister-in-law, Ann Ries (Frank) Teach. A private service with the Marine Honor Guard was held at Union Cemetery on Saturday, September 5, with Chaplain Steve Rice officiating. Contributions may be sent to the Capital City Hospice in his memory. Arrangements by Rutherford Corbin Funeral Home, 515 High Street, Worthington, OH 43085. Condolences may be sent to the family at www.rutherfordfuneralhome.com. Semper Fi.

The family of Richard Graf created this Life Tributes page to make it easy to share your memories.

Send flowers to the Graf family.