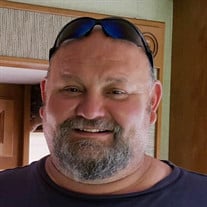 Richard “Brent” Derry, 55, lost his short and courageous battle with cancer on June 30, 2021 in Marion, Ohio. Brent was a loving son and best friend to his parents, Rick and Marlene (Wiles) Derry of Marion, Ohio, formerly of Columbus, Ohio. He was born December 20, 1965 in Zanesville, OH and besides a short residence in Texas, lived his entire life in the Columbus and Delaware, Ohio areas. He is survived and will be missed everyday by his parents, and by his sister and brother-in-law, Lori and Craig Miller, of Marion, Ohio and brother, Jon Derry of Columbus, Ohio. Brent is also survived by his nieces whom he cherished and adored, Logan (Josh) Carey of Waldo, Ohio, Devan Miller of Marion, Ohio, and twin great nieces, Maren and Mila Carey. He was enormously proud to be their uncle and has been known to brag on many occasions. Brent is preceded in death by many special family members and friends. Brent was a 1984 graduate of Whetstone High School where he played football. He was an avid fan of Nascar, the Buckeyes and of his niece, Devan and whatever softball team she was playing for. On September 21, 1991, Brent married the love of his life, Mary (Null) Derry and although the marriage ended in divorce in 2003, they remained the best of friends until her death in 2009. In 2010, he began a long term relationship with his high school sweetheart, Debbie (Kubic) Cameron. This relationship ended in 2019 and they also maintained a very close friendship. He was an SAL member of the Worthington American Legion Post 239 and he held a special place in his heart for our veterans. He loved all animals and enjoyed supporting the Columbus Zoo. Brent was the first one there if you needed a hand, an ear to listen or a shoulder to cry on. Fixing things for family and friends brought him immense joy and he could fix just about anything. He truly was a “jack of all trades”. He was also the first one with a prank or joke and took pure delight in making people laugh. He will be remembered for his huge heart and giving the biggest, best hugs! Visitation will be held at Rutherford-Corbin Funeral Home in Worthington, Ohio 5:00pm to 8:00pm on Wednesday, July 7, 2021. For those that wish, in lieu of flowers, memorial donations may be made to either the Columbus Zoo or the American Legion Post 239 in Worthington, Ohio.

Richard &#8220;Brent&#8221; Derry, 55, lost his short and courageous battle with cancer on June 30, 2021 in Marion, Ohio. Brent was a loving son and best friend to his parents, Rick and Marlene (Wiles) Derry of Marion, Ohio, formerly of Columbus,... View Obituary & Service Information

The family of Richard Brent Derry created this Life Tributes page to make it easy to share your memories.

Send flowers to the Derry family.