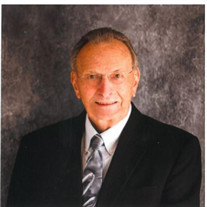 Richard Lyle “Gus” Custer, 89, Worthington, OH, passed away peacefully on December 15 surrounded by his family. Born in Terre Haute, Indiana on August 20, 1931 to Walter and Katherine Custer, Gus was a storyteller, a master builder and technician, and a friend to all. A graduate of Dublin High School, class of ’49, Gus married the love of his life, Nancy Wilcox, in 1950 and settled in Worthington to raise their family. After working various jobs in the construction field, Gus was hired into the maintenance division at The Ohio State University Airport in 1964, and moved his family to Dublin. He enjoyed his time at the airport and eventually rose to director of operations before retiring in 1996. Some of the highlights of Gus’ career were assisting with state-wide snow removal during the blizzard of 1978 with the airport’s equipment; dealing with the accidental landing of a TWA 707 jet that had mistaken Don Scott Airport for Port Columbus; being on hand for the arrival of the first two giant pandas to visit the Columbus Zoo; riding in the Goodyear Blimp; welcoming home the Ohio State basketball teams; and arranging personal helicopter rides for his children, where they were picked up from their yard on Sawmill Road. Being married to an avid garage sale junkie, Gus and Nancy found themselves at an auction in Vinton County in 1994. When they left, they were the proud owners of 30 acres and an old farmhouse. Two years later, Gus retired, and he and Nancy moved to Vinton County and got to work. After a couple of years, with the help of numerous friends and family, Nancy had another dream home. They resided there for 12 years of bliss before returning to central Ohio, after making many new friends, planting over 3,000 pine trees and hosting many family gatherings. Over the years, Gus and Nancy traveled the country – usually the back roads – drove to Alaska in a VW van, wintered in Venice, Florida, and even spent time in South Korea visiting son Chris and daughter-in-law, Kay. Gus was a member of the Dublin Historical Society, Dublin PTA, Linworth United Methodist Church, Ohio Nurserymen’s Association, chair of The Ohio State University Society of Technicians and served on the board of the Vinton Soil and Water Conservation District. He is preceded in death by his parents; son, Richard “Dickie” Jr.; daughter, Cynthia Smith; brother, Don (Mary); and sister, Shirley (Bob). Gus is survived by Nancy, his wife of 70 and a half years; children, Candace (Steven Righter), Charles (Maureen Miller) and Christopher (Kyong “Kay”); grandchildren, Christopher “Skip” Smith, Todd Smith, Cory (Brad) Guindon and Kyle (Jenna) Righter; two great grandchildren, Milo Guindon and Theodore Gus Righter; brother John (Tama) and sister Lynne (Dwight) Lingenfelter; and many cousins, nieces and nephews. Many thanks to all of Gus’ caregivers, especially Candace Righter who was a constant presence and great source of strength and love, always. A celebration of Gus’ life will be held on Sunday August 8, 2021 from 3:00pm to 5:00pm at the RUTHERFORD-CORBIN FUNERAL HOME, where a service will be held at 5:00pm where everyone will gather together to share their favorite stories about the man we lovingly called Dad, Safety, Pappy and Pa Pa. A Graveside Service will be held at Union Cemetery on Monday August 9, 2021 at 10:00am with Pastor John Girard officiating. In lieu of flowers, donations may be made to the James Cancer Hospital. To send an online condolence, please visit www.rutherfordfuneralhomes.com.

The family of Richard Custer created this Life Tributes page to make it easy to share your memories.

Send flowers to the Custer family.