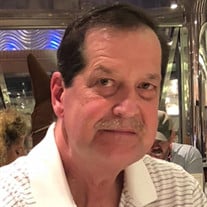 Rex Alan Hatfield, age 66, of Powell, Ohio passed away, due to several health issues, January 5th 2022 at Kobacker House in Columbus, Ohio. He was born February 21st 1955 to Beryl and Retha Hatfield in Columbus, Ohio. He married Debra Jones on October 14th 1995 in Columbus, Ohio. Growing up, in the Hilltop neighborhood of the west side, he was a paper boy for the Dispatch and graduated from West High School, class of 1973. He was a workhead in Group D for Sears Distribution Center for 21 years. He then went to Volvo as a warehouse worker for 28 years. Rex is survived by his wife, Debra; daughter Amy Hatfield; sons, Joseph (Erin) Hatfield, Christopher George (girlfriend Angel), Derrick George (fiancé Heather) and Darren George; sisters Karen Wackenhuth and Karla (Curtis) Lowery; grandchildren Zacary, Tyler and Jacob Hatfield, Madelyn and Ariana George; Nephews, Alex (Faith) Lowery, Justin Lowery (fiancé Maggie); Niece, Miranda (Hunter) Harrell and many loving relatives and friends. He was proceeded in death by his parents, Beryl and Retha Hatfield; grandparents, Roy and Ina Hatfield and Tyree and Sally Blizzard; nephew Terry Wallace (TJ). Rex, throughout his lifetime, was on many bowling leagues and baseball teams. He enjoyed fishing, camping and just being with family and friends. He found pleasure in going to the casinos, especially if he won. He was a “The Ohio State Buckeyes” fan, Cleveland Browns and Indians fan. He also like the Cincinnati Bengals and the Reds. He loved going to his grandsons’ baseball games and anything, anything his grandchildren were involved in. All kids and animals were attracted to him and you could see the love they had for him. Rex was loyal to his daily, if not twice daily, visit to White Castle for his “large senior cup of coffee with cream please”. He loved hearing and telling jokes, acting goofy and having everyone laughing. Rex was one of the good guys, amazing, kind, funny, caring with a beautiful heart and not a mean bone in his body. He will be truly missed. Donations can be made to American Diabetes Association, Rheumatoid Arthritis Foundation and Kobacker House. .

The family of Rex Alan Hatfield created this Life Tributes page to make it easy to share your memories.

Send flowers to the Hatfield family.