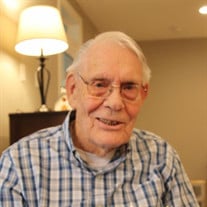 Ray was born September 20, 1923, in Kearney, Nebraska to Swedish immigrants Herman and Julia Belfrage. He graduated from High School in Scotts Bluff Nebraska and served in the US Navy. His service was in the Atlantic Theatre during WWII, as a flight engineer in a PBY Catalina “flying boat”. His love of the Navy and airplanes was consistent through his life. Ray married Dorothy Mae Stewart “Dottie” who preceded him in death after a 71-year marriage. After the War, Ray graduated from the Roosevelt School of Aviation in Long Island, NY and went on to a long career as an aircraft mechanic and inspector for the Navy. He retired as a civilian Navy plant representative, holding the position of Quality Control Supervisor in 1980. As a member of the Reynoldsburg United Methodist Church, Ray was involved in the site location and building committee for the current church location on Graham Rd. Though Ray and Dottie moved to Upper Arlington and later Dublin, Ohio, they remained involved with may lifelong friends in Dottie’s hometown of Reynoldsburg. He served as past president of the Truro Township volunteer fire department. Ray was a current member of the Northwest United Methodist Church. Ray was Past Master of Reynoldsburg Masonic Lodge #340, and a 70-year member. Member of the York Rite Bodies, a 32-degree Mason, Valley of Columbus, and member of the Aladdin Shrine. Ray was Past Patron of Worthington Chapter, and Past Grand Patron of the Grand Chapter of Ohio. Ray passed away peacefully on March 15, 2022, surrounded by a family that loved him deeply. Ray was so very proud of his daughter Debbie (Gary) Peterson, grandson Joshua Peterson and granddaughter Julia Peterson, son Eric (Alison) Belfrage, grandson Ray (Kate) Belfrage. Ray also had two great grandchildren, Hollis, and Dane Belfrage, along with many nieces and nephews, friends, and caregivers. In retirement Ray was a passionate woodworker. He loved wood and created many works of art with his hands. He built toys, furniture, and carved figures, he loved watching, identifying, and carving birds. As a great mechanic, he had a lifelong love of cars, which included his 1965 Ford Mustang. He also often talked about his 1936 Ford Cabriolet V8 Convertible as the one that “got away”. Ray had an indominable positive attitude throughout his life and only remembered the good. He was a supremely kind and caring person who affected all who knew him. Ray will be missed by those that loved him, and all that knew him loved him. Services include Visitation Friday April 1, 4-6PM at Rutherford Funeral Home 450 W. Olentangy St. Powell, Ohio 43065 with an Order of Eastern Star Service at 6:00 PM and a Masonic Service at 6:30 PM. A Funeral service on Saturday April 2 at 11:00 AM at NW United Methodist Church 5200 Riverside Dr. Columbus, Ohio 43220

Ray was born September 20, 1923, in Kearney, Nebraska to Swedish immigrants Herman and Julia Belfrage. He graduated from High School in Scotts Bluff Nebraska and served in the US Navy. His service was in the Atlantic Theatre during WWII, as... View Obituary & Service Information

The family of Raymond E. Belfrage created this Life Tributes page to make it easy to share your memories.

Send flowers to the Belfrage family.