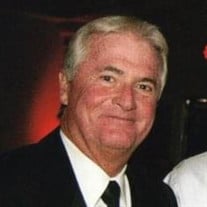 Ralph “Doc” Daughenbaugh, Jr., of Dublin, OH, passed away peacefully on Tuesday, March 8, 2021. He was 74. Doc was born November 28, 1946, in Bellefonte, PA, to the late Ralph, Sr. and Margaret (Miller) Daughenbaugh. A 1964 graduate of Bellefonte High School, he went on to receive his Bachelor of Arts in Business from Dyke College in 1969. Doc worked as a supervisor for SOHIO and BP oil for over 30 years. He married Jacquie Witker on December 19, 1970. He and Jacquie were long time residents of Dublin and enjoyed raising their children together. Doc enjoyed traveling and spending time with his family and many friends. He was an avid Penn State fan and loved rooting for his Nittany Lions, regardless of the sport. He is survived by his children, Kelly Yocum, of Dublin ,OH; his son, Brett (Stacey) Daughenbaugh, of Delaware, OH; two granddaughters, Ashley and Alexis Yocum; grandson, Jaxon Daughenbaugh; and his mother-in-law, Helen Snyder Witker, of Lakeside, OH. Besides his parents, Doc was preceded in death by his wife of 37 years, Jacquie, and an infant son.

The family of Ralph B. Daughenbaugh Jr created this Life Tributes page to make it easy to share your memories.

Send flowers to the Daughenbaugh family.