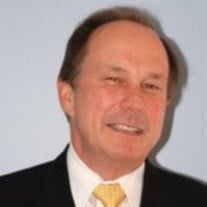 Patrick William Beyer, age 73, of Powell, Ohio died on January 3, 2021 at First and Main, Lewis Center, Ohio. A funeral service will be held at St. Joan of Arc Catholic Church, Powell, Ohio on January 8, 2021 at 10:30am. Entombment will take place at Resurrection Cemetery in Lewis Center, Ohio directly following service. Patrick was born January 4, 1947 to Charles and June Beyer in St. Paul, Minnesota. He was united in marriage to his surviving wife, Patricia Fravor on December 4, 1993. Patrick graduated from Blue Earth High School, Minnesota in 1965. He was Co-Captain of the football team, played baseball, a state conference and district champion in wrestling, and President of the BE student council. He attended Saint John’s University in Minnesota from 1965-67 where he was a NCAA division III wrestling champion and team captain. He attended the University of Minnesota from 1967-69 where he graduated with a BA in Business, Sociology, and Psychology. Patrick proudly served in the United States Marine Corps Reserve from 1969-75. During his extensive and successful career in sales and marketing, Patrick was an executive with strong leadership skills who cared deeply about a dedicated work ethic, relationships with people, exceeding set goals/expectations, and motivating others. He also spent a great deal of time devoted to his community and as a volunteer coach in youth soccer programs. After retiring, Patrick was an advocate for the Senior Outreach Ministry Program at St. Joan of Arc. He also served as a volunteer and Eucharistic Minister at St. Joan. Patrick cared so much about his family and others. He always had a smile and a kind word for everyone whether you were family or a stranger. He encouraged us to live life to the fullest, to not be afraid of challenging ourselves, and to love one another. He would always sing the loudest in church even if slightly off key and had a laugh so loud that you couldn’t help but join in with him. He had a very kind heart and was deeply loved by his family and friends. Patrick is survived by his wife Patricia who resides in Powell, Ohio, his children from his first marriage with Mary McRury: Michelle Ciotola and husband Michael of Cincinnati, Ohio, Jeanne Beyer-Loynes and husband Brandon of Dublin, Ohio, and Patrick Shane Beyer and wife, Hillarie of McKinleyville, California, nine grandchildren: Johnny, Delaney, Ally, Justin, Hannah, Emily, Patrick William, Willow, and Acacia, three great-children: Oliver, Thea, and Dean, his two stepsons: Tom Fuller and wife Anna of Westerville, Ohio and Brian Fuller and wife Holly of Plain City, Ohio, six grandchildren: Gabriella, Amanda, Dante, Brooke, Joe, and Cameron, his brother Terry Beyer and wife Linda of Lenoir City, Tennessee, niece Teresa Sherwood and husband Jason of Laramie, Wyoming, and nephew Rahn Beyer and wife Leila of Knoxville, Tennessee, their sons Mason and Maddox, his Uncle George William “Bill” Beyer and wife Jean of Ventura, California and cousins Tim Beyer of Ventura, California and Kim Beyer of Moor Park, California. Patrick is preceded in death by father, Charles Beyer, mother, June Beyer, both formerly of Powder Springs, Georgia and brother Charles F. Beyer Jr. formerly of Blue Earth, MN.

Patrick William Beyer, age 73, of Powell, Ohio died on January 3, 2021 at First and Main, Lewis Center, Ohio. A funeral service will be held at St. Joan of Arc Catholic Church, Powell, Ohio on January 8, 2021 at 10:30am. Entombment will take... View Obituary & Service Information

The family of Patrick William Beyer created this Life Tributes page to make it easy to share your memories.

Send flowers to the Beyer family.