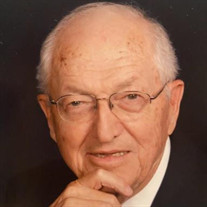 Dr. Nolan J. Rindfleisch, PhD, age 94 of Worthington, Ohio, passed away on Tuesday, February 2, 2022. He was a proud veteran of the US Navy (1945-46). On August 6, 1945, as a volunteer draftee, Nolan was on a train to the US Navy Great Lakes Training Center when the first atomic bomb dropped on Hiroshima. He spent his year of service in Chicago and Minneapolis. Nolan is preceded in death by his parents, Lillian and Adolph Rindfleisch, son Michael, infant son John, and brother Norval Rindfleisch. He is survived by his wife of 66 years, Rita Mae (Savard), a brother Greg Rindfleisch (Sally) of Minneapolis, and children Roberta (James) Gail (Doug) Noel, Leah (Jesse) and Sarah (Peter) and grandchildren Danielle, Molly (Andy), Shawne, Nathan, Joseph, Ethan, Abigail, Alexis and Emily, along with beloved nieces and nephews. Nolan was a 1945 graduate of Cretin High School, St. Paul, MN: The College of St. Thomas, St. Paul, Minnesota, (B.A.) Latin and Greek, 1949. His first job was teaching English and Latin at Blackduck High School, Blackduck, Minnesota. In 1958, he graduated from the University of Minnesota, Minneapolis (MSW) and in 1976, he received his PhD from Case Western University. He accepted a teaching position in 1964 with the Ohio State University College of Social Work, and settled on Chatham Road in Clintonville, eventually moving to Worthington in 1978. Nolan held Buckeye football tickets in Section 27C for fifty years and was eager to share those tickets with family and friends. In 1994, after thirty years of service with Ohio State, he retired to write poetry, learn Spanish, and starting in 2000, began his association with the Central Ohio Senior Softball League to play first base for the Worthington senior softball team. He hung up his cleats and glove at 92 years old. As a member of St. Elizabeth Catholic Church, Nolan served as a lector and was active in the church’s Social Seniors group,and enjoyed activities as a member of the Ohio State Retirees Association. The family will receive friends on Thursday, February 10 from 10:00-11:00 at St. Elizabeth Catholic Church, 6077 Sharon Woods Blvd., Columbus 43229, where a Mass of Christian Burial will begin at 11:00. Burial will follow immediately at Resurrection Cemetery, 9571 North High Street, Lewis Center, 43035. Nolan enjoyed his years of teaching at Ohio State and knew the sacrifices students make to finish college. If you wish, memorial contributions in Nolan’s name can be made to the College of Social Work Anne Hayes Memorial Scholarship (643027) Donations to the St. Elizabeth Church Food Bank is also welcomed.

The family of Dr Nolan Joseph Rindfleisch PhD created this Life Tributes page to make it easy to share your memories.

Send flowers to the Rindfleisch family.