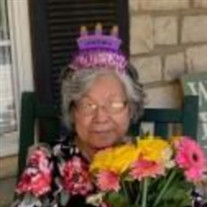 Naomi Nishimura Valentine passed away Monday, September 14, 2020 at the age of 81. Her beloved husband Don Valentine passed away in March 2020. Naomi was born on July 17, 1939 in Japan and met Don while he was stationed in Japan serving in the Air Force. Don immediately fell in love with Naomi, pursuing her after he returned to the USA. She moved to the United States when they married in March of 1968. She worked for Honda as a Japanese interpreter for many years. She also worked with the Ohio State University and Ohio Health as an interpreter. She became an attorney in Japan and visited her homeland on occasion. She loved arts and crafts and traveling. Naomi & Don loved taking cruises and spent much of the later years on cruise ships. Having no children of their own, their focus was on the hundreds of orchestra students that Don taught through the Upper Arlington Schools and in their home. They impacted these young people with their loving, encouraging and kind spirits. Don and Naomi spent most of their lives focusing on Don’s love of teaching orchestral music to his students who they treated like their own children. Naomi’s father passed away during World War II and her mother passed away in 1979 after moving to the USA to live with Don and Naomi. Naomi is survived by their long-time dear friend Dave Garman and good friends and caretakers Alan and Terry Starr. We would like to thank the kind and caring staff of Brookdale Muirfield and the Brookdale Muirfield Clare Bridge staff who loved and cared for Naomi. Arrangements are being handled by Rutherford Funeral Homes. Condolences may be sent to Alan and Terry Starr, 3820 Rushmore Drive, Upper Arlington, OH 43220. A memorial service will be held at a later date.

The family of Naomi Nishimura Valentine created this Life Tributes page to make it easy to share your memories.

Send flowers to the Valentine family.