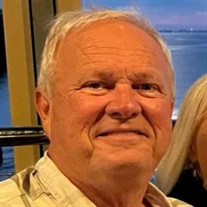 Monty Wayne Dixon, of Dublin, Ohio, passed away on June 10, 2022. He was born May 20, 1950 in Portsmouth, Ohio to the late Viola (Marhoover) and Floyd Dixon, Jr. After moving numerous times while growing up he arrived in Lincoln Village on the Westside of Columbus. Monty graduated from Pleasant View High School where on the school bus he met his future wife, Deborah. On July 18, 1970 Monty married his high school sweetheart and best friend Deborah Lynn (Roese) Dixon. He served in the United States Army as a Sharpshooter from July 1970 to January 1972, stationed in Colorado Springs, Colorado. After being honorably discharged from the Army, Monty worked for AEP and retired after 40 years. During this time, he was a loving son, husband, and brother to Tom and his wife Connie. He became a father when Matt and then Danielle came into the world. Years later Monty got to walk Danielle down the aisle when she married Clancey Sweeney, and got to add another to the “Dixon-way” when Matt married Jessica Larcom. Monty’s life was forever changed by keeping up with and being a doting Paw Paw to his grandchildren; Brynn and Colin Sweeney, and Adalyn and William Dixon, who meant everything to him. He is also survived by Becky (Roese) and Jim Rains, Jacque and David Roese, Kelly and Brian Roese, Aunts and Uncles along with numerous nieces and nephews; his best friends, Kim and Ron Michalec, and his special angel on earth, Amberle Burnette Monty and Debbie spent the last 8 years traveling the country in their RV, Murphy, where they loved to visit our nation’s National Parks together and with friends. In 2020, Monty, Debbie, Woody, and Murphy settled into Cypress Woods RV Resort in Fort Meyers, Florida where they have met a second family that they both cherish. Together, Monty and Debbie were inseparable for 57 years and built a close and loving family that they are both extremely proud of. They were members of Indian Run United Methodist Church in Dublin, Ohio. Calling hours will be Thursday, June 16 from 4:00 - 7:00pm at Rutherford Funeral Home at Powell, 450 W. Olentangy Street, Powell, Ohio. A service will be held on Friday, June 17 at 11:00am at Rutherford Funeral Home at Powell, followed by internment at Dublin Cemetery, Dublin, Ohio. In lieu of flowers, donations may be made to the National Pancreatic Cancer Foundation at https://www.npcf.us/memorial-giving/ in Monty’s memory.

Monty Wayne Dixon, of Dublin, Ohio, passed away on June 10, 2022. He was born May 20, 1950 in Portsmouth, Ohio to the late Viola (Marhoover) and Floyd Dixon, Jr. After moving numerous times while growing up he arrived in Lincoln Village on the... View Obituary & Service Information

The family of Monty Wayne Dixon created this Life Tributes page to make it easy to share your memories.

Send flowers to the Dixon family.