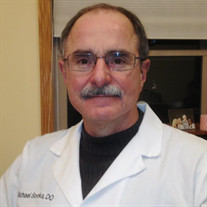 Michael D. Soroka, DO passed away in the early hours of November 24, 2021 at the age of 72 in Athens, OH, after a lengthy battle with colon cancer. He was surrounded by his wife of 46 years, Ellen, along with his two children, Michael and Sarah, and his five grandchildren. He is survived by his wife, Ellen, of Athens, his daughter Sarah (Michael) Maloney, of Colorado Springs, CO; son Michael John (Barbara) Soroka of Athens; and grandchildren Nathan, Luke, Ileana, Theodore, and Adam. He Is also survived by his brother, Mark Soroka of Cleveland, and sister Maria (Daniel) Sak of Worcester, MA. An Osteopathic physician practicing for many years in Cleveland, and for the past 12 years in Athens, he was beloved by generations of patients, who recognized in him a deep well of compassion and kindness for those entrusted to his care. His dedication to the healing arts of medicine was an extension of his love and devotion to his family and his Orthodox Christian faith. He will be sorely missed. Michael was born August 1, 1949 in Cleveland to Helen (Fedor) and Michael Soroka, Jr. He graduated from Maple Heights High School in 1967 where he showed an aptitude for science. As the oldest child of an immigrant family, he was the first one to attend college. He received a scholarship to Case Western Reserve University, graduating in 1971 with a BS in physics, later earning an MS in physiology. While conducting research at Harvard Biological Labs and living in Cambridge, MA, his life took a fateful turn when he noticed a ‘roommate wanted’ ad at the school looking for an extra flatmate. Being in need of housing himself, he called the number. Shortly after, he met Ellen Kane of Lovell, ME, the sister of one of his flatmates. And the rest, as they say, is history. The two were married at Archangel Michael Orthodox Church on Union Ave. in Cleveland in 1975. Following graduate work at The University of Texas Medical Branch in Galveston in 1977, he realized that his true vocation lay not in research, but in medicine and the care of others. In 1978 he was admitted to Kansas City University of Medicine and Biosciences College of Osteopathic Medicine (KCU-COM) where he graduated as a Doctor of Osteopathy in 1982. After graduation, he returned to Cleveland with his young family where he completed his residency in Family Medicine, practicing in the Cleveland area for the next 25 years. Michael’s love for integrating Osteopathic Manipulative Medicine (OMM) into his practice eventually led him to join the faculty at Ohio University’s Heritage College of Osteopathic Medicine in Athens where he taught medical students and treated patients with OMM full-time. Michael found his greatest joy in his family, and was happiest surrounded by his children and grandchildren, finding that he became like a child himself in those moments of play. He loved his chosen profession passionately. His desire to help those in pain was deeply rooted in his soul, and he would often offer to treat friends and acquaintances at the drop of a hat. He had a keen interest in the martial arts, which he studied in Cleveland for over ten years, eventually earning a black belt in Shaolin Kung Fu and tai chi. Michael was a man of strong convictions, possessing an open and inquisitive mind, who enjoyed discourse on every subject one could imagine. Michael remained steadfast in his Orthodox Christian faith throughout his life, and it served as the firm foundation upon which all his knowledge and philosophy of care rested. He and Ellen were faithful members of the local Orthodox Church wherever they lived, contributing to the life of the parish in many ways, but especially by singing in the church choir. Earning his rest from this world, we pray that our Lord may greet him with these words: “Well done, thou good and faithful servant; enter into the joy of thy Lord.” The funeral arrangements will be as follows: Visiting hours will be on Thursday, December 2 from 5-7 pm at Rutherford-Corbin Funeral Home in Worthington, OH, concluding with a memorial service (panikhida) at 6:30 pm. There will be additional visitation from 10-11 am on the morning of December 3 at St. Stevan Serbian Orthodox Church in Columbus, with the funeral service beginning there at 11 am. Interment will follow at Resurrection Cemetery in Lewis Center, followed by a memorial meal for family and friends. Due to the ongoing pandemic, the family kindly requests that everyone attending any events wear a facial covering. Friends may, if they wish, make a donation to the scholarship fund for students at St Gregory of Nyssa Orthodox Church, PO Box 14932, Columbus, OH 43214. In the memo area, please write “Scholarship Fund.” Donations may also be made to the Salvation Army at www.salvationarmyusa.org in Dr. Soroka's memory.

Michael D. Soroka, DO passed away in the early hours of November 24, 2021 at the age of 72 in Athens, OH, after a lengthy battle with colon cancer. He was surrounded by his wife of 46 years, Ellen, along with his two children, Michael and Sarah,... View Obituary & Service Information

The family of Michael D. Soroka DO created this Life Tributes page to make it easy to share your memories.

Michael D. Soroka, DO passed away in the early hours of November...

Send flowers to the Soroka family.