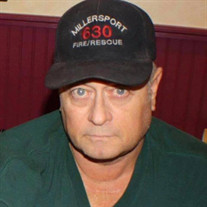 Michael R. McKenzie "Mac" age 65 of Millersport, Ohio passed away peacefully surrounded by his loving family at the Pickering House in Lancaster, OH. He was a Sergeant in the United States Air Force, stateside, as an Aircraft Pneudraulic Repairman during the Vietnam Era. He was a Perry County Sheriff's Deputy and worked for the New Lexington Police Dept. He drove Semi Truck for CRST and then went to work for Canam Steel until his work injury caused him to medically retire. He was preceded in death by his father, Jess D. McKenzie and mother, Virginia L. Phillips. He is survived by his daughter, Melissa (Adam) Azbell of Baltimore, OH. Son, Heath (Marie) McKenzie of Madera, California. Granddaughter, Taylor Azbell, grandson, Mason McKenzie and soon to be grandson, Miles McKenzie. Siblings, Becky Thomas of Bremen, Jody McKenzie of Thornville, and Bruce McKenzie of Wilton Manors, FL. Many nieces and nephews and his best friend, his dog, Weezee. He was a graduate of the class of 1974 at New Lexington High School. He attended Hocking College for Police Basic Training/Ohio Criminal Code and he attended the Community College of U.S. Air Force in Law Enforcement/Military Police. He is a member of the New Lexington Methodist Church. A member of the Millersport Lions Club. He donated to many charities such as Wounded Warrior Project, St. Jude, ASPCA, and many more. He was a very generous person and loved to buy strangers dinner when he would go out. It wouldn't be anything for him to buy dinner for several different families at a time. He loved having people come over to sit on his porch with him and long car rides around the lake. We would like to thank the staff at The Pickering House for taking such good care of our dad; especially his aide, Carla and his RN, Mitch. A Celebration of Life will be held at the Millersport Lions Club House at 1:00 p.m. on Saturday, April 10, 2021. 2905 Chautauqua Blvd NE, Millersport, OH 43046. A dinner will follow. Memorial contributions can be made to the Millersport Lions Club P.O. Box 506 Millersport, Ohio 43046.

Michael R. McKenzie "Mac" age 65 of Millersport, Ohio passed away peacefully surrounded by his loving family at the Pickering House in Lancaster, OH. He was a Sergeant in the United States Air Force, stateside, as an Aircraft Pneudraulic Repairman... View Obituary & Service Information

The family of Michael "Mike" McKenzie created this Life Tributes page to make it easy to share your memories.

Send flowers to the McKenzie family.