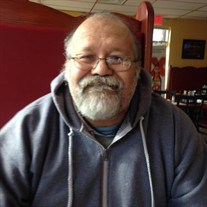 Michael (Mike) Glenn Jones passed away on Saturday, September 18 at his home. Just like he dealt with all experiences in life, Michael managed his illness with strength and grace. Michael was born on August 30, 1958 in Dayton, Ohio to the late Conrad And Nina (Ball) Jones. He graduated from Hillard High School in 1977 where he met and married his high school sweetheart, Brenda (Cobb) Jones. After high school he dedicated nine years of service to the United States Army. Michael had many jobs throughout his life but none he loved more than being a house parent and mentor to troubled teens. Mike and his wife Brenda’s love for children led them to expanding their family later in life and adopting two newborn baby girls. Michael is survived by his wife Brenda (Cobb) Jones, his four daughters Kristi (Jones) Wilkins and her fiancé Steve Thomas of Dacula, Georgia, Venita (Jones) Jolie and her husband Ken Jolie of Dacula, Georgia, Gabriella Jones of Junction City, Ohio and Rachael Jones of Junction City, Ohio, his son Anthony Otworth Jones of Columbus, Ohio and stepson Brian Stearns and his wife Paula (Stanley) Stearns of Bethlehem, Georgia, his sisters Carolyn (Jones) McGinnis of Plain City, Ohio and Joyce (Jones) Conner of Hicksville, NY, his brothers Timothy Jones and his wife Malou Jones of Strongsville, Ohio and Jeffery Jones and his wife Kay (Davilla) Jones of Annville, KY. Michael has eight grandchildren and several nieces and nephews. He is preceded in death by his parents Conrad and Nina Jones and a brother-in-law Robert McGinnis. Graveside service will be held at Jerome Township Cemetery at 1:00 pm at Jerome Township Cemetery in Plain City, Ohio. A celebration of life will be held immediately following at LaRosa’s in Dublin, Ohio. Burial services are being conducted by Rutherford Funeral Home in Powell, Ohio.

Michael (Mike) Glenn Jones passed away on Saturday, September 18 at his home. Just like he dealt with all experiences in life, Michael managed his illness with strength and grace. Michael was born on August 30, 1958 in Dayton, Ohio to the late... View Obituary & Service Information

The family of Michael G. Jones created this Life Tributes page to make it easy to share your memories.

Send flowers to the Jones family.