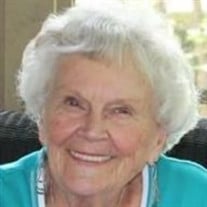 The family of Mary Jo Buckingham announces her passing on February 12th, 2021, after a brief battle with cancer. A passionate educator and life-long learner, Mary Jo raised six children, instilling in them the same value for education that would inspire all six of them to attend and successfully graduate college. Her legacy continues as several of her children and grandchildren have become educators themselves. She adored her grandchildren and they could always expect a book with a stuffed animal for birthdays, Easter, and Christmas. Mary Jo loved working as a media center aide for Greensview Elementary with Upper Arlington Schools, where she especially enjoyed reading to classes, helping students choose books, and assisting teachers with audio/visual technology. She adored traveling, and was able to have visited places such as Spain, Portugal, England, Wales, Italy, Puerto Rico, Mexico and Hawaii with Bill, her late husband. This past July, she was diagnosed with lymphoma and fought the battle with chemotherapy. She died peacefully and received the Last Rites on Thursday, February 11th at the Kobacker House at the age of 90. The family would like to thank the amazing staff, nurses, Doctor Hudak, and Doctor Petros, for the wonderful and loving care she received during her stay. She left this world in dignity due to the compassionate care she received. She will be missed by her three children: Jeri (Bob) Price, Gib (Dawn) Buckingham, Tracy (Don) Tandy, her numerous grandchildren: Eric (Meghann) Ongaro, Alyssa (Alessandro) Mogavero, Courtney (Daniel) Tolnay, Christina and Michael DaBronzo, Jessica (Jason) Timmons, Adam (Kelsey) Cellar, Chelsea (Charles) Cellar, Don Anthony Tandy, Hillary Tandy, and Heather (Bryce) Benson, as well as her great grandchildren: Ava, Tatum, Reese & Claire Jo Ongaro, Juliette & Price Timmons, Madelyn & Isaac Benson, Alex & Luca Mogavero, and Sophia Tolnay. Mary Jo was predeceased by her parents, Claude Dolby and Margaret Allen; her husband, William Buckingham; children Tammy Cellar, Claudia DaBronzo, and Teri Jo Buckingham-Hirst; and her grandson, Paul Geoffrey Price. A celebration of Mary Jo’s life will be held at a later date at Sunset Cemetery in Galloway, Ohio, with Lt Colonel Bryce Benson officiating at the graveside service. In lieu of flowers, memorial donations may be made to the Kobacker House, 800 McConnell Drive, Columbus, Ohio, 43214.

The family of Mary Jo Buckingham announces her passing on February 12th, 2021, after a brief battle with cancer. A passionate educator and life-long learner, Mary Jo raised six children, instilling in them the same value for education that... View Obituary & Service Information

The family of Mary Jo Buckingham created this Life Tributes page to make it easy to share your memories.

The family of Mary Jo Buckingham announces her passing on February...

Send flowers to the Buckingham family.