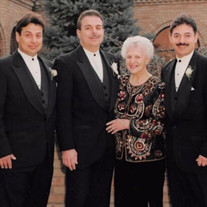 Not sure what to send?

Mary Cataland (a.k.a yiayia), 97, of Columbus, OH passed in the comfort of her home during sunrise on the summer solstice. Tuesday, June 21st. Born in Youngstown, Ohio on March 19, 1925 to parents Elias and Eleftheria Mavrogeorgis. Mary was a proud first generation Greek American very involved in her community and the Greek Orthodox Church throughout her life. She was married to Max Cataland for over forty-five years, and cared for him until his passing in 1993. Mary was a strong Ikarian woman of faith who always lived life on her terms, and turned to God for everything. A true believer and steward of the Lord who in later years became known to many as Yiayia. Yiayia was also a bookworm, to say the least. She attended Ohio University, University of Michigan, and Ohio State. She received her Master’s degree in education. She spent many years as a teacher and a librarian. She advocated on behalf of animals, children, and anyone in need. Mary was preceded by her two brothers Christos “Christ” George and Costas “Gus” George. She is survived by her beloved sons: Stelios “Stan” Cataland (Sunny), Elias “Louie” Cataland, and Eleftherios “Teri” Cataland. As well as her dear granddaughters Maria Cataland and Eleni Cataland (the lights of her life) who continue to shine her light into the world. She is also survived by brother-in-law Dr. Samuel Cataland, Dorothy Talaganis, and many nieces and nephews. She now lives in heaven with her husband, parents, brothers, and countless rescue animals. Calling hours are at RUTHERFORD-CORBIN FUNERAL HOME, 515 High Street in Worthington on Monday, June 27th from 6-8 p.m. The funeral service will be held at the Greek Orthodox Church on Tuesday, June 28th at 11:00 a.m. followed by a burial at Union Cemetery. There will be a final gathering at the Greek Orthodox Church following the service for refreshments and food. In honor of Yiayia we offer the suggestion of donating to an animal rescue as another option to sending flowers. Linked below is Yiayia’s niece Mary George’s cat rescue, www.angelsassistingfelines.com. Condolences to www.rutherfordfuneralhome.com.

Mary Cataland (a.k.a yiayia), 97, of Columbus, OH passed in the comfort of her home during sunrise on the summer solstice. Tuesday, June 21st. Born in Youngstown, Ohio on March 19, 1925 to parents Elias and Eleftheria Mavrogeorgis. Mary was... View Obituary & Service Information

The family of Mary Cataland created this Life Tributes page to make it easy to share your memories.