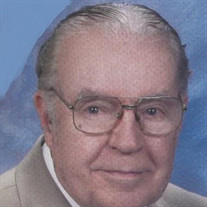 Marvin Walter Homan, age 94, of Columbus, Ohio passed away June 2, 2021, at his home, at the Forum of Knightsbridge. Marvin was born on August 24,1926 in Dayton, Ohio. He was a devoted husband, loving father, grandfather, and great grandfather. Marvin was preceded in death by his parents, Olive and Walter Homan; his wife, Dorothy May Homan; and his son, David Walter Homan. He is survived by his daughter, Jane Ann and son-in-law Logan Parrott of Campbellsville Kentucky. He has six grandchildren; Sarah Ray and family of Central City Kentucky, Tiffany Overstreet and family of Campbellsville Kentucky, Joshua Parrott and family of Louisville Kentucky, Christopher Homan and family, Kevin Homan and family, and Leah Gillis and family, all of Columbus, Ohio, and twelve great grandchildren. Marvin was a second-generation Ohio State University graduate, where he interned in the sports information department. Upon graduating, he continued working in the OSU athletic department, where he served for over 40 years. He was awarded the loyalty award in 1998 and was inducted into the Ohio State University Hall of Fame in September 2007. Marvin will be remembered as the “Voice of the Buckeyes,” due to his announcing of OSU football and basketball games for WOSU radio. Marvin loved his family, the Ohio State University Buckeyes, The St. Louis Cardinals, his beloved pug Mai-Ling, and traveling. He travelled to all 50 states, had two memorable trips to Europe, and attended many bowl games. Marvin was a member of North Community Lutheran Church and lived in Worthington for 48 years, before moving to the Forum in 2007. Visitation will be held Tuesday, June 8 from 10:00 am -1:30 pm at the RUTHERFORD-CORBIN FUNERAL HOME, 515 High Street, Worthington, Ohio. Services begin at 1:30 pm, with interment following at Walnut Grove Cemetery in Worthington. The family wishes to express heartfelt thanks for the kind, loving care of the Ambassador Suites Staff at the Forum. Condolences may be made to the family at www.rutherfordfuneralhome.com

Marvin Walter Homan, age 94, of Columbus, Ohio passed away June 2, 2021, at his home, at the Forum of Knightsbridge. Marvin was born on August 24,1926 in Dayton, Ohio. He was a devoted husband, loving father, grandfather, and great grandfather.... View Obituary & Service Information

The family of Marvin W Homan created this Life Tributes page to make it easy to share your memories.

Send flowers to the Homan family.