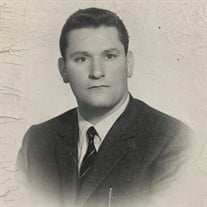 Mario Bittoni, loving husband, father, and grandfather, passed peacefully into eternal life at the age of 93 on Sunday, May 23, 2021. Mario was born on October 10, 1927 in the region of Umbria, province of Perugia, village of Tavernelle, Italy, to the late Giuseppe and Annunziata (Pistolini). He moved to Rome at the age of 12, lived through World War II, and met the love of his life, Maria. They were married on August 29, 1951, and had two sons, CarloAlberto and Giorgio. Mario had a passion for cars and was a test driver for Fiat. He had the honor of delivering cars to Pope John XXIII and Pope Paul VI whom he received personal blessings from. Mario was also proud to have met Pope John Paul II. In 1969, Mario immigrated to the United States with his wife and sons, and started a new life in Columbus, Ohio where he worked in the automotive and construction industries, and together with Maria, owned a restaurant, Casetta Romana. Mario was a devout Catholic and family man. His greatest love was his wife of 70 years, Maria, who will miss him deeply. He was always by her side. Mario lived life to the fullest and was the life of every party. Mario enjoyed the outdoors, staying active, and playing Italian cards. He treasured every moment spent with his grandchildren; Mark, Anna Maria, and Christina, and was a proud great-grandfather to Max and Leo. Preceded in death by his parents, Giuseppe Bittoni & Annunziata Pistolini; brother Giulio Bittoni; brothers-in-law Carmelo (Antonietta) & Gerardo Cugini; sisters-in-law Antonia (Cesidio) DeRubeis & Cesidia Cugini. Survived by loving wife of 70 years Maria Bittoni (Cugini); sons CarloAlberto & Giorgio (Marisa) Bittoni; grandchildren Mark (Arielle), Anna Maria & Christina Bittoni; great-grandchildren Maxwell & Leonardo Bittoni; brother-in-law Cesidio Cugini; sisters-in-law Loreta (Tonino) Pellegrini, Teresa Marinelli, Giuseppina Cugini; and many family & friends. Family will receive friends Wednesday, May 26 from 4:00 PM to 8:00 PM at Rutherford-Corbin Funeral Home at 515 High St, Worthington, OH 43085. Mass of Christian burial will be held Thursday, May 27 at 10:00 AM at St. Michael Catholic Church at 5750 N High St, Worthington, OH 43085. Interment to follow at Resurrection Cemetery at 9571 High St, Lewis Center, OH 43035. In lieu of flowers, the family requests contributions please be made to the James Cancer Hospital Solove Research Institute c/o Mario Bittoni. I commend you, my dear Mario to almighty God, and entrust you to your Creator. May you rest in the arms of the Lord who formed you from the dust of the earth. May holy Mary, the angels and all the saints welcome you now that you have gone forth from this life. May Christ who was crucified for you, bring you freedom and peace. May Christ who died for you admit you into his garden of paradise. May Christ, the true Shepherd, embrace you as one of his flock. May he forgive all your sins, and set you among those he has chosen. May you see your Redeemer face to face, and enjoy the vision of God, forever.

Mario Bittoni, loving husband, father, and grandfather, passed peacefully into eternal life at the age of 93 on Sunday, May 23, 2021. Mario was born on October 10, 1927 in the region of Umbria, province of Perugia, village of Tavernelle, Italy,... View Obituary & Service Information

The family of Mario Bittoni created this Life Tributes page to make it easy to share your memories.

Send flowers to the Bittoni family.