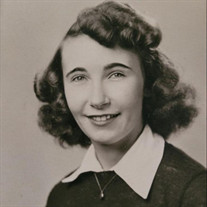 Marilyn Rose Poling (nee Swartz) - nurse, wife, mother, grandmother, sister, and friend - passed away from Alzheimer's at Danbury Assisted Living and Memory Care, Monday, Nov. 22, 2021. Born at home in St. Marys, Ohio on July 28, 1925 to Edward and Leota Schaefer Swartz, Mom lived a rich full 96 years. She was a graduate of St. Marys High School where she played on the Rough Riders' Girls Basketball Team and sang alto in the Triple Trio. She worked at Goodyear for a year until she was recruited by the U. S. Department of Public Health for the Cadet Nurse Corps. World War II created a critical shortage of medical staff at home. Hospitals were closing, and people were going without health care. To prevent the collapse of civilian nursing, starting in 1943, the Public Health Department intensively trained and certified registered nurses in exchange for their pledge to serve the country for the duration of the war. Along with their other duties, Cadet Nurses like our mother worked tirelessly through a polio epidemic and cared for returning servicemen and women. Mom's training took place at the Miami Valley Hospital School of Nursing in Dayton, Ohio. After three years of accelerated study, she graduated on Sept. 18, 1947, her proudest moment! She received her nursing license from the State of Ohio on Feb. 5, 1948. On Sept. 2, 1947, Mom married Kenneth Eugene Poling at St. Paul's United Church of Christ in St. Marys. He was her roommate Maxine's brother and had just returned home from France when they met at Maxine's wedding. Dad proposed to Mom a year later on Valentine's Day. They subsequently lived in Miami, Florida; Macon, Georgia; and Memphis, Tennessee before returning to Ohio in 1957 and settling in Sharon Township. In 1967, they moved to what has become our family home of 53 years in Old Worthington. A dedicated nurse, Mom worked at Miami Valley Hospital, the University of Miami FL Hospital, the U.S. Marine Hospital in Memphis and as a private duty nurse. In their spare time, she and Dad traveled widely throughout the U.S., visiting all of the lower 48 states and Hawaii. Her "happy places" were Sanibel Island, Florida where she loved shelling and Tammy's cottage on Lake Michigan, where she sat on the deck for hours or roamed the shore collecting beach rocks. At home, Mom loved flower gardening, reading historical fiction, and watching NCIS and Blue Bloods. She put family first, taking great joy especially in her five grandchildren, always supporting them and celebrating their successes. She made certain that our holidays together were full of fun and family. Mom also loved animals. She helped round up and return home many lost pets, and she faithfully fed her birds, squirrels, deer, and neighborhood strays. She was a proud member of the Ohio Historical Society's First Families of Ohio and First Civil War Families of Ohio. She was also a member of the Worthington Area Nurses Association, Children's Hospital Twigs, and the Worthington Women's Club. Mom was preceded in death by our dad, Kenneth E. Poling, Sr., sister Joanne Heiby, and three infant sons. She is survived by her children Cheryl Best, Ken (Cindy) Poling, Tammy (Bill) Fullerton; and grandchildren Michael (Heather) Best, Megan Best (Shaun Cox), Kevin (Chris) Poling, and Will and Delaney Fullerton; sister Janet Wiswasser of Muncie, Indiana; brother-and-sister-in-law Kirby and Edie Poling; and numerous nieces and nephews. Family and friends are invited to join us for her funeral service at Rutherford-Corbin Funeral Home, 515 High St., Worthington, Ohio at 1:00 p.m., Monday, November 29th. The visitation will be held starting at noon. There will be a graveside ceremony at Walnut Grove Cemetery, 5561 N. High St., following the funeral service. If you would like to consider making a donation in Mom's name, please consider the following: The U.S. Cadet Nurse Corps are the only uniformed WWII corps members not to be recog­nized as for their service. The U.S. Cadet Nurse Corps Service Recog­ni­tion Act was recently passed by the U.S. House of Representatives to give Cadet Nurses veteran's status with an honorable discharge from service where merited; burial benefits from the Department of Veterans Affairs (not including Arlington National Cemetery); and allowing the Secretary of Defense to provide honorably discharged Cadet Nurses with a service medal. The bill has been sent to the Senate where it was previously rejected. If you would like to support passage, please contact your U.S. Senators or contribute to uscadetnurse.org/donations. Contributions may also be made to Mom's favorite charity, St. Jude's Children's Research Hospital, www.stjude.org, or to the Alzheimer's Association of Central Ohio, www.alz.org/centralohio.

The family of Marilyn Poling created this Life Tributes page to make it easy to share your memories.

Send flowers to the Poling family.