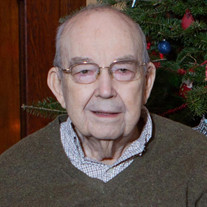 MAST, LOWELL R. 1927 – 2021 Lowell R. Mast, age 94, died May 11 at home surrounded by his wife, children and grandchildren. Born April 15, 1927 in Champaign County, Ohio to Marie (Kesler) and Rolland Mast. Lowell was a proud Eagle Scout and Coxswain in the United States Naval Reserves for eight years, including a year on the U. S. S. Seer, a mine sweeper, following VJDay, 1945. Lowell married the love of his life, Ruth E. Moats on June 24, 1950, displaying an enviable model of marriage for over 70 years. Being the first in his family to go to college, he attended The Ohio State University on a scholarship from Grimes Aerosmith Co. of Urbana. He was active in Alpha Phi Omega, the scouting fraternity, promoting the “Ugliest Man on Campus” fundraising challenge. He graduated in Industrial Engineering in 1951, worked with a small firm until joining H. A. Williams & Associates, consulting engineers, at its inception in 1954. He retired as a principal 33 years later. His family is most proud of his designing the first exterior lighting for The LeVeque Tower, aka “Grandpa’s Building”. Lowell is survived by Ruth and his son, Craig (Kathy), daughter, Kathy Mast Kane (George) and daughter-in-law, Kim Richards Mast; grandchildren Scott Palmer, Jeff Palmer, Danica Kane (Zach Fredin), Mitchell Kane, and DeWitt Kane; great-grandchildren Christopher, Savannah and Tacoma Palmer. Lowell was predeceased by infant brother, Donald and beloved son, Keith Alan. He was an active supporter of historic downtown Dublin, Ohio, a member of Dublin Community Church and a 32nd Degree Scottish Rite Mason. The family thanks caregivers Ann Marie, Marlene, Kristina, Teresa, Dr. Stuart J. Kanter and OhioHealth Hospice for their loving care. A Memorial Service officiated by Dr. Mark Arni and burial among loved ones will be held at Sunset Cemetery on Monday, May 17 at 12:30 pm. In remembrance, make a donation, plant something beautiful, tinker with a timepiece, turn some wood, play with a model train, or take a trip. And give serious consideration to getting a shingles vaccination. RUTHERFORD-CORBIN FUNERAL HOME in charge of arrangements. “Go placidly amid the noise and the haste, and remember what peace there may be in silence.” Desiderata

The family of Lowell Mast created this Life Tributes page to make it easy to share your memories.

Send flowers to the Mast family.