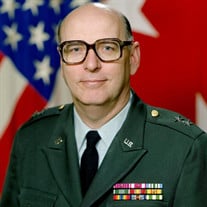 Barker, Llyle J. Jr., age 88, enthusiastically moved into eternal life with Jesus on January 15, 2021. Llyle was a faithful believer in God/Jesus, a dedicated husband, a loving father and grandfather, and friend to many who had the good fortune to know him. He was a distinguished American soldier and academician. His life, family, and friends have always been considered wonderful blessings from God. Llyle was a member/ teacher/ former Elder at the Worthington Christian Church, and a Bible scholar and teacher throughout life. Llyle served a 30-year US Army active duty military career culminating as Chief of Army Public Affairs in the grade of Major General. As a soldier, Llyle served in a variety of Army command and military staff positions worldwide, seventeen of these years overseas. In Europe, he commanded the 2/28th Field Artillery Battalion and later the 210th Artillery and Missile Brigade consisting of seven artillery battalions. He served as a military public affairs officer at every level of the military. After military retirement, Llyle joined the faculty of The Ohio State University School of Journalism, where he was a tenured associate professor and taught thousands of undergraduate and graduate public relations students, and was the academic advisor to many. Throughout his careers, he was nationally recognized as a motivational speaker and consultant on public relations, futurism, change communications, risk management, and crisis intervention. Llyle was a graduate of The Ohio State University (BScEduc), Shippensburg University (MScCommo), a special graduate program at the University of Wisconsin, and a graduate of the Army Command and Staff College and the Army War College. He was active in a variety of national and local veterans, civic and public relations organizations. Llyle is survived by his wife/soulmate of 65 years, Maxine (Metcalf); two sons and daughters-in-law, Llyle III and Sue of Lincoln, Illinois, and Daryl and Kim of Reynoldsburg; two grandsons, Matthew (Sydney) and Kevin; and two granddaughters, Lydia (Derik) and Madalyn; sister-in-law Judy Metcalf of Westerville; nephews, Dick, Charles (Kay), and Jim (Helena) Doeble, and Terry and Todd (Kayla) Metcalf; many cousins, and friends. Burial will be at Union Cemetery. Llyle said he was moving on to his special reward in Heaven, and those remaining on earth should seek more ways to serve their God and those around them. In lieu of flowers, any contributions can be made to the Worthington Christian Church Development Fund (worthingtoncc.org) A private ceremony will be held for immediate family.

Barker, Llyle J. Jr., age 88, enthusiastically moved into eternal life with Jesus on January 15, 2021. Llyle was a faithful believer in God/Jesus, a dedicated husband, a loving father and grandfather, and friend to many who had the good fortune... View Obituary & Service Information

The family of Llyle J. Barker Jr. created this Life Tributes page to make it easy to share your memories.

Send flowers to the Barker family.