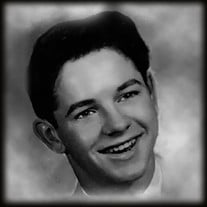 Leslie H. Gates, 82, passed away on January 4, 2021 from brain stem stroke complications. He was born in Amlin, Ohio and raised in Jerome, Ohio. He is preceded in death by parents, Myrtle (Dillie) and Merrill Gates, sister Betty Ann Belley (Demana), brothers Richard and Robert. Survived by his loving wife Mary (Leonard) of 24 years, his younger brother Greg, daughters Lisa Kovinchick (Tony), Amy Wray (Mark), sons Aaron (Nina) and John Pemberton (Kim). Grandchildren, Kate Wray, Colin Kovinchick, Erin Wray, Brendon Kovinchick and Teegan Gates. Les graduated in 1956 from Dublin High School. At Dublin High School he lettered in basketball, football, baseball, and track and was inducted into the Dublin High School Athletic Hall of Fame as a member of the 1955 State runner-up team. He attended Georgia State College while in the Army and Ohio University after his service in the Army. Les served three years in the United Sates Army, three years Active Reserves, seventeen years in the Ohio National Guard retiring as a Chief Warrant Officer 3. He retired from the insurance industry having been a regional manager for Allstate and eventually owning his own agency in old Dublin. Les was a charter member and served on the Board of Directors of the Dublin, Ohio Chamber of Commerce. He served on the initial CIC Committee with Chi Weber for Dublin and was Chairman of the 1975 and 1976 Dublin Fourth of July celebration and working with the Kiwanis Frog Jump for many years. Les was a charter member and co-founder of the Marysville, Ohio Moose along with being a two-time President of the Loyal Order of Moose. He was a lifetime member of the Millcreek Memorial VFW Post 3320 in Marysville, Ohio, along with being a lifetime member of the Military Officers Association of America. He was also a member of the Military Officers Association of Central Ohio and the American Legion. In his later years, Les became an author, recounting his life and love of Jerome, Ohio where he grew up in the 1940's and 1950's, titling his first book "Jerome" and his second, "To Jerome". Funeral Service will be held at 5:00 pm Sunday, January 10, 2021 at RUTHERFORD FUNERAL HOME AT POWELL, 450 West Olentangy Street, Powell, Ohio where friends may call from 2:00 to 5:00 pm prior to the service. Private Burial will be held at Jerome Cemetery, Jerome, Ohio. In lieu of flowers donations may be made to: The Salvation Army.

Leslie H. Gates, 82, passed away on January 4, 2021 from brain stem stroke complications. He was born in Amlin, Ohio and raised in Jerome, Ohio. He is preceded in death by parents, Myrtle (Dillie) and Merrill Gates, sister Betty Ann Belley... View Obituary & Service Information

The family of Leslie (Les) H. Gates created this Life Tributes page to make it easy to share your memories.

Send flowers to the Gates family.