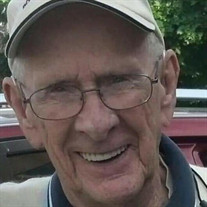 Lee was born in Circleville, Ohio, to Russell and Bessie Siegwald. He graduated from Circleville High School in 1941. In 1944, he married his high school sweetheart, Mary Ruth Owens, at Aberdeen Proving Grounds, Maryland. He soon deployed, as 2nd Lieutenant, to the Philippines and Japan. He proudly served and loved his country. Mary Ruth obtained her nursing degree from Ohio State University during that time. Upon his return from the war, Lee attended Ohio State University, and completed his degree in architecture from Franklin University. They moved to Columbus in 1950. Lee worked as a skilled carpenter with his brother, Paul, while raising five children. His most enjoyable hobby was golfing, with admirable skill. He golfed with his brother, and always walked the course. He enjoyed crossword puzzles, Sudoku, studying history, and reading the newspaper daily. His children remember him sitting in his chair and reading the encyclopedias. He was an excellent dancer, and loved Glenn Miller and music of the 1940s. He was an avid Buckeyes fan! Lee retired soon after Mary Ruth's death in 1985. He eventually met his friend and companion, Dorothy Hamilton. They enjoyed road trips, visiting friends, and exploring Ohio. Throughout those years, he made several trips to visit his children living in Colorado. Lee was a devoted father and grandfather. He remained in the family home in Beechwold for 68 years. The last two and a half years of his life, he happily resided at Willow Brook Christian Community in Delaware, Ohio. Lee adored the entire staff there, and they cared for him with great love, respect, and compassion. His greatest joy was his family and many friends. His number one priority was the value of family, and always remaining close. In September 2018, Lee was blessed to participate in Honor Flight Columbus. He said it was an experience he would never forget. Lee was preceded in death by his parents, wife, Mary Ruth, brother, Paul, and daughter, Karen. He is survived by sons, Gary and Jim, daughters, Barbara Boucher (Jim), Kathy Golde (Lenny), 10 grandchildren, and 14 great grandchildren. The family will announce a celebration of life later this year.

Lee was born in Circleville, Ohio, to Russell and Bessie Siegwald. He graduated from Circleville High School in 1941. In 1944, he married his high school sweetheart, Mary Ruth Owens, at Aberdeen Proving Grounds, Maryland. He soon deployed,... View Obituary & Service Information

The family of Leland "Lee" Russell Siegwald created this Life Tributes page to make it easy to share your memories.

Lee was born in Circleville, Ohio, to Russell and Bessie Siegwald....

Send flowers to the Siegwald family.