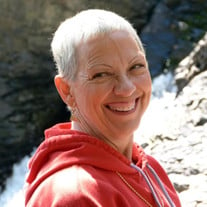 Lee Ann (McCoy) Fausnaugh, 66, of Columbus, Ohio was called home to her Lord’s side on Thursday, May 13, 2021. She was born July 14, 1954 to Virginia (Lordier) McCoy and John A. McCoy Sr. in Columbus, Ohio. She married Edwin E. Fausnaugh on June 23, 1984 also in Columbus. She was a financial and development planner for 20+ years and a beloved member of Xenos Christian Fellowship, where she was a respected leader and mentor. She also gave her time freely as a volunteer for Central Ohio Youth for Christ. She is lovingly remembered by Edwin E. Fausnaugh (husband), John A. McCoy Jr. (brother) and his partner Cathy J. Hironaka and his children and grandchildren, Patrice A. Paider (sister) and her husband Bill J. Paider and their children and grandchildren. She is endearingly remembered by Kimberly A. Hall (daughter) and her husband Brian Hall as well as their children Mia, Lindsey, and Brian, Christopher E. Fausnaugh (son) and his wife April Neu-Fausnaugh as well as their children Carson, Alex, and Layne, Stephanie L. Phillips (daughter) and her husband Jason Phillips as well as their child Alexandria, and Kelly M. Short (daughter) and her partner Tim Powers as well as her children Aiden, Ryann, and Jackson. She will also be respectfully remembered by all that had the honor of knowing her. She was preceded in death by her parents, Virginia and John. Visitation will be Thursday, May 20, 2021, 2-4 pm and 6-8 pm at Rutherford-Corbin Funeral Home in Worthington, Ohio; an intimate service will be held on Friday, May 21, 2021, at 11 am at the same venue. Graveside service immediately to follow at Resurrection Cemetery in Lewis Center, Ohio. Flowers are welcomed, or the family asks for donations to be made in Lee Ann’s name to The International Waldenstrom’s Macroglobulinemia Foundation (https://iwmf.com).

The family of Lee Ann Fausnaugh created this Life Tributes page to make it easy to share your memories.

Send flowers to the Fausnaugh family.