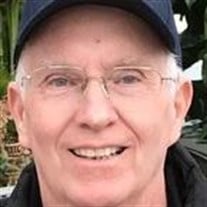 Lawrence “Larry” Byron Olsen, 73, of Columbus, OH passed away on May 26th, 2021 after a short battle with cancer. Larry was born on May 31st, 1947 to Lawrence A and Eleanor Olsen in Columbus, OH. After graduating from St. Thomas Aquinas High School in 1965, he went on to graduate from The Ohio State University in 1970 with a Bachelor of Science in Business Administration. Larry worked in Financial Services for Columbus Southern Power (American Electric Power) for 39 years retiring in 2010. After retiring, Larry served as a mentor with Big Brothers Big Sisters and as a tutor at the Karl Road Library. He loved spending time with his grandchildren, playing golf, going to amusement parks, and his daily one mile walk to Kroger. He was preceded in death by his parents Lawrence A Olsen in 1997, Eleanor Olsen in 2020, sister Rita Olsen in 1959, and infant brother Lawrence F Olsen in 1943. Larry is survived by his wife Deborah Olsen; sons James (Cheri) Dempsey, Kevin (Heather) Olsen, Erik (Leah) Olsen; grandchildren J T Dempsey, Alex Dempsey, Sierra Olsen, Peter Olsen, Noah Olsen, Felicity Olsen, Henry Olsen, Kristen Olsen, Savannah Olsen, and Timothy Olsen. In his time of illness, he was served by beloved caregivers Sue Kincaid and Cheryl Pascua. A Memorial Service will be held at Union Cemetery Mausoleum, 3349 Olentangy River Road in Columbus, Ohio at 2:00 on Friday, June 11th . In lieu of flowers, the family requests donations be made to Big Brothers Big Sisters https://bbbscentralohio.org/donate/

The family of Lawrence B. Olsen created this Life Tributes page to make it easy to share your memories.

Send flowers to the Olsen family.