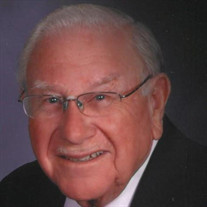 Lawrence Allen Bailey, 94, born in Homer, Ohio and long-time resident of Westerville, passed away peacefully on November 12, 2020. He was preceded in death by his parents Perry of Alexandria, and Stella of Columbus, his five brothers, and loving wife of 69 years Frances. Larry is survived by his son Tim, sister-in-law, Ina May Williamson, along with many nieces and nephews. Larry was a 1945 graduate of Westerville High School and was drafted to the Service during World War II. He graduated from the Army’s Anti-Aircraft Artillery School at Fort Bliss, Texas where he attained the rank of Staff Sergeant. Upon discharge, he returned home and enrolled in the Ohio State University graduating in 1951 with a B.S. in Accounting. Larry began a long career with the State Automobile Mutual Insurance Company of Columbus, where he served a Manager of the Payroll, Auditing and Cashier Department. Professionally he served as a member and Past-President of Columbus Chapter of Chartered Property and Casualty Underwriters. Larry was Past-Master of Goodale Lodge #372, Captain Emeritus of Aladdin Shrine Patrol , Past-President of Northeast Shrine Club, and member of Scottish Rite Valley of Columbus, Mt. Vernon Commandery, Jester Court #8, Kentucky Colonel, and Triangle Chapter Eastern Star. A generous community volunteer, he served the Westerville community through the Westerville Senior Center as president, advisory board member, and annual snowflake castle volunteer. In addition, he served as past-president of the Buckeye Sideliners and Still Going Strong. Central College Presbyterian Church provided spiritual for his guidance for over 50 years where he and Ann had many friends. Larry’s generosity of time, talent, service and smile will be greatly missed by his family and friends. Calling hour will be held at RUTHERFORD-CORBIN FUNERAL HOME 515 High St, Worthington, Ohio, on Tuesday November 17, 2020, beginning at 10am with the service to follow at 11. In lieu of flowers the family requests donations to the Shriners Hospitals for Children https://donate.lovetotherescue.org/

Lawrence Allen Bailey, 94, born in Homer, Ohio and long-time resident of Westerville, passed away peacefully on November 12, 2020. He was preceded in death by his parents Perry of Alexandria, and Stella of Columbus, his five brothers, and loving... View Obituary & Service Information

The family of Lawrence A Bailey created this Life Tributes page to make it easy to share your memories.

Send flowers to the Bailey family.