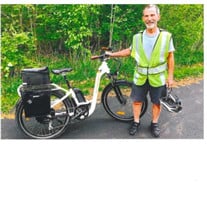 Larry Hetrick passed on November 11, 2021 in Westerville, Ohio. Larry was born on October 30, 1934 in Columbus, Ohio. He graduated from Hilliard High School in 1952. He resided in the Columbus, Ohio area all of his life. This past year he was diagnosed with cancer and lost his battle with the disease. Larry started his career with Shell Oil, eventually owning and operating three gas stations in the Upper Arlington area. At the age of 30 he joined the Columbus Ohio Fire Department as a fireman, then moved to the rescue squad and became a medic, retiring at age 55. After leaving the fire department, Larry opened the Oakland Park Garage, a mechanic's garage in Clintonville that he owned and operated for approximately 20 years. He eventually became an electrician at Settle-Muter Electric for a number of years before enjoying a more traditional retirement. Upon this retirement he became an avid cyclist, traveling throughout Ohio on any given day of the week. He approached this sport the same way he approached his work; with strategy and goals. He kept a journal to track his journeys, where he charted more than 36,000 traveled miles over the last five years with a longest ride of 90 miles in March of 2021. While his work and cycling achievements are impressive, Larry's lasting legacy is his impact on the people most important to him; his family and friends. Larry was never hesitant to volunteer his assistance and expertise anytime it was needed and his involvement usually made the outcome of projects and tasks far better, and at times far more complex, than initially intended. He was usually the first to arrive and the last to leave social gatherings and he had the rare ability to make anyone he met feel valued and important. Preceded in death by his parents William and Olive Hetrick, (nee Mitchell) Brothers John Hetrick, David Hetrick (Freda), James Hetrick (Valerie) and sister Sylvia Lawson. Survived by his sister Sarah Macys (John) of Columbus, Ohio. Survived by his wife Anita Hetrick (Abolins) of 49 years and 7 sons and daughters: Chuck Hetrick, Geneva Settle, Ruby Hetrick (Larry Butler), Jeff Hetrick (Andrea), Steven Wallace (Marybeth), Cynthia Ross and Michael Wallace. Grandchildren: William Miller, Tatum Hetrick, Daniel Settle (Alana), Charlie Hetrick, Amanda Herlihy (Kyle), Melissa Murphy (Justin Tiesch), Zachary Ross (Natalie), Alyssa Wallace, Tyler Wallace and Corryn Wallace. He is also survived by 12 great grandchildren. Per Larry's wishes, private cremation will take place with arrangements made by Rutherford Corbin Funeral Home of Worthington, Ohio.

Larry Hetrick passed on November 11, 2021 in Westerville, Ohio. Larry was born on October 30, 1934 in Columbus, Ohio. He graduated from Hilliard High School in 1952. He resided in the Columbus, Ohio area all of his life. This past year he was... View Obituary & Service Information

The family of Larry Hetrick created this Life Tributes page to make it easy to share your memories.

Send flowers to the Hetrick family.