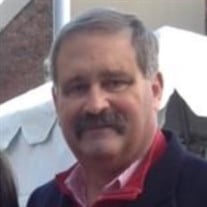 L. Craig Seipel, age 67, of Powell, Ohio, passed away on February 20, 2021. He was born in Columbus, Ohio to the late Lewis E. Seipel and Mary Lou (Morrison) Seipel. He was preceded in death by his parents, and his wife of 26 years, Randie Selover Seipel. He is survived by his adoring wife, Rev. Lou Seipel; son, Captain Zach Williams; son, Sam Williams and daughter in law, Jennifer Williams; and two fabulous grandchildren, Madeline, and Bennett; sisters, Sheri (Tom) Gay and Kristie (Greg) Anderson; brother, Kurt (Nancy) Seipel; and numerous nieces and nephews. Craig adored his family and delighted in spoiling his grandchildren. Craig never met a stranger and could strike up a conversation, anywhere, anytime. His gift was to make everyone feel as if he had waited all day just to speak with them. He kept and maintained life-long friendships and was always interested in others and their wellbeing. As a clergy spouse, he delighted in his church family, working in the Stonybrook kitchen, and participating in the Coffee and Conversation Sunday School Class. He was a rabid Ohio State Football fan and loved nothing more than having friends over to watch the games. He had a deep affection for animals and spoiled all of his pets over the years. He loved to cook, and truly enjoyed cooking for others. Craig was a proud veteran of the United States Air Force, having 7 years of active-duty service working in intelligence. At his death, he was a National Account Manager with Huntington Technology Finance, Inc., having more than 30 years experience in leasing technology equipment. Craig was one of a kind: Courageous, generous, devoted without question, kind, and full of mischief. He was the real deal – one of those people that made the world more steady and ground more solid. There are no words for how deeply he will be missed. Private Family Service. A Celebration of Life Service for the community will be Celebrated at a later date. In lieu of flowers Memorial Contributions may be made to: Stonybrook United Methodist Church Legacy Foundation, 485 Cherry Bottom Road, Gahanna, OH 43230. .

L. Craig Seipel, age 67, of Powell, Ohio, passed away on February 20, 2021. He was born in Columbus, Ohio to the late Lewis E. Seipel and Mary Lou (Morrison) Seipel. He was preceded in death by his parents, and his wife of 26 years, Randie... View Obituary & Service Information

The family of L. Craig Seipel created this Life Tributes page to make it easy to share your memories.

Send flowers to the Seipel family.